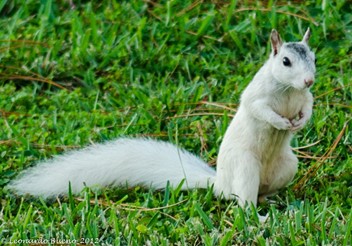 You read it right! Here at the lab, we’ve got our very own population of white squirrels and no, they are not albino, contrary to popular belief. The white squirrel is actually a genetic anomaly due to a mutated gene from the common Eastern Gray Squirrel. It is called leucism, which is a condition characterized by reduced pigmentation in animals caused by a recessive allele. Unlike albinism, it is a reduction in all types of skin pigment, not just melanin. White squirrels lack red eyes and also tend to have a gray patch on their heads and what is referred to as a “dorsal stripe” down their backs.

These unique squirrels can be found throughout North America and Canada. Some major places they can be found include Marionville, Missouri; Brevard, North Carolina; Olney, Illinois; Kenton, Tennessee; Northern Keys, Florida; Charlotte, North Carolina; Exeter, Ontario Canada, and nearby Tallahassee, FL (Tallahassee Museum of History & Natural Science). They have been reported in other areas along the Gulf Coast as well.

Everyone already knows squirrels as scavengers that scurry around finding and burying nuts and seeds. Well there is a purpose to this seemingly neurotic behavior. Not only does burying their food ensure a supply for the cold winter months, but it also fertilizes the soil. Many times squirrels forget where they stashed their nuts and luckily they do not go to waste! Oftentimes, a new tree is the result of a forgotten nut by a squirrel. 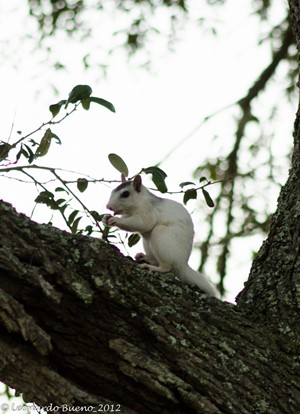 There is one very big disadvantage to a squirrel’s fur being white. It makes it much more difficult for them to camouflage, therefore exposing them to predators. On the contrary, sometimes it can be beneficial for a squirrel to be white depending on their surrounding environment. If the area they inhabit is made up of a lot of white buildings or trees, they stand a better chance at blending in and surviving with white fur. However, in some areas it is simply unknown why white squirrels have chosen to reside there and the locals usually refer to myths for explanation.