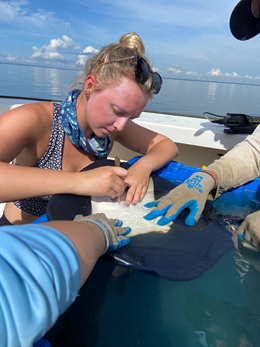 This past week, MSc student, Ashley Dawdy was awarded the Donald R. Nelson Research Award  at the Annual Business Meeting of the American Elasmobranch Society! This award is in honor of one of the Society’s founders and is for research on the behavioral and sensory biology of chondrichthyan fishes.  Chondrichthyan refers to any member of the diverse group of cartilaginous fishes such as sharks, skates, rays, and chimaeras. Ashley is currently studying the movement and habitat use patterns of both juvenile and adult cownose rays (Rhinoptera bonasus) in Apalachicola Bay. 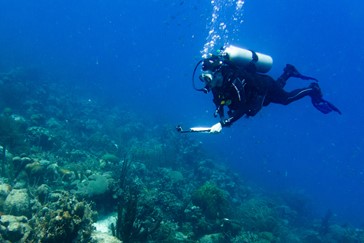 Ph.D. Candidate, Josh Manning has been awarded a 2021 - 2022 STEM Chateaubriand Fellowship to collaborate with Dr. Simon Benhamou at the Centre d'Ecologie Fonctionnelle et Evolutive (CEFE)/ Centre National de la Recherche Scientifique (CNRS) in Montpellier, France. Dr. Benhamou will host Josh in France for 4 months (beginning January 2022) as they investigate patterns of movement and space use in Caribbean parrotfishes, with a focus on how they move in relation to one another within areas of shared space. This project will contribute to his dissertation in Dr. Sophie McCoy’s lab here at FSU.

2021 FSUCML Board of Trustees Scholarship Recipients 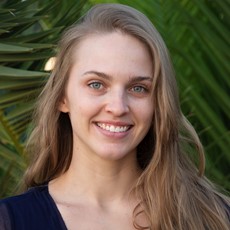 Erica Atkins, (Dept. Biological Science. Advisor: Dr. Scott Burgess) will focus on characterizing spatiotemporal patterns for the accumulation of genetic diversity in a local marine bryozoan (Bugula neritina) that successfully recovers from a sudden population reduction (bottleneck event) biannually. She aims to improve the understanding of the processes and patterns behind successful population recoveries. This knowledge can then be used to inform conservation and recovery efforts for other at-risk populations. Erica was also awarded the Coastal & Marine Conservation Graduate Student Award.  Summer Research Assistantship. 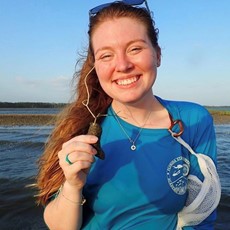 Rachael Best, (Dept. Biological Science. Advisor: Dr. Don Levitan) will continue examining the role of phenotypic plasticity in the persistence of a common species of gorgonian octocoral (Leptogorgia virgulate) found on both inshore and offshore reefs. Sessile organisms are organisms that are anchored to a hard substrate and cannot move about freely. Because of this, plasticity has been shown to be the primary mechanism allowing the species to persist under highly variable environments. She aims to better understand the mechanisms enabling this species and other sessile organisms to persist under variable and changing environmental conditions. 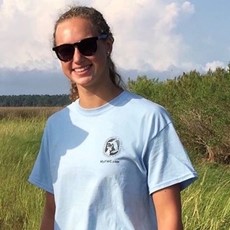 Nika Blank, (Dept. Biological Science. Advisor: Dr. Sandra Brooke) will be investigating the diversity and community structure of benthic hardbottom ecosystems across the coastal West Florida Shelf (WFS) and identifying the location of shifts in species distribution or community diversity. There is a lack of data on the hardbottom communities of the coastal WFS, creating a large gap in understanding the taxonomy and ecological roles of the species that both colonize and rely on these areas. Ultimately, identifying areas where there are ecoregion boundaries or transitions in the hardbottom communities will provide valuable insight into the connectivity of these habitats and how they may change in the future under more stressful environmental conditions. 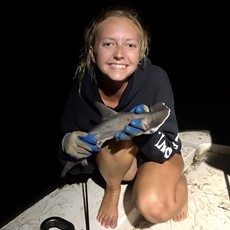 Ashley Dawdy, (Dept. Biological Science. Advisor: Dr. Dean Grubbs) will focus on researching the behavior, ecological role and seasonal area use of cownose rays (Rhinoptera bonasus) in Apalachicola Bay, FL. She will track cownose rays over the course of two years using acoustic telemetry. The data collected during this time will provide insight regarding changes in seasonal bay use across the species’ lifespan, as well as reveal potential critical habitat for mature individuals and pups using specific areas for refuge, pupping, or mating. 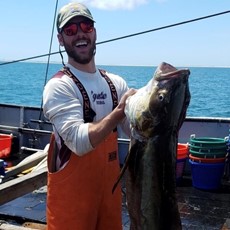 Blake Hamilton, (Dept. Biological Science. Advisor: Dr. Dean Grubbs) will study the isotopic turnover rate and species-specific diet tissue discrimination factors of multiple tissues in the southern stingray (Hypanus americana). Many ecological studies using stable isotope analyses to address questions related to diet and nutrition rely on species-specific diet tissue discrimination factors (DTDFs) which describe the difference in isotopic signatures of consumer and prey. However, many elasmobranch researchers have questioned the reliability of DTDFs, as more in-depth analyses have shown that DTDFs are quite variable in elasmobranchs. Due to low sample sizes, more robust experimental designs are required in order to validate these claims and provide more realistic DTDFs for application in future trophic studies. 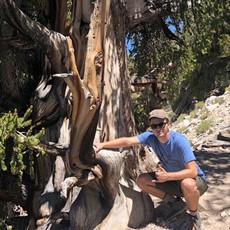 Sean McCollum, (Dept. Biological Science. Advisor: Dr. Sophie McCoy) will track the reduction of calcification-derived CO2 by seagrass and epiphyte (plants that grow on other plants) productivity. Seagrass meadows host large quantities of calcium carbonate (CaCO3) within their sediments and facilitate high rates of calcification. This has generated concern as the precipitation of CaCO3 reduces alkalinity and emits CO2 at a rate of .6 moles per mole of CaCO3 precipitated. It is presently unclear if CO2 emitted by calcification directly evades to the atmosphere or if metabolic or physical processes buffer its influence on air-sea CO2 flux. Quantifying this process is important in understanding the influence CaCO3 precipitation on the carbon cycle of seagrass meadow ecosystems. He aims to better understand this cycle by using mesocosm experiments to directly quantify the ability of seagrasses and epiphytes to buffer the emission of CO2 by calcification. 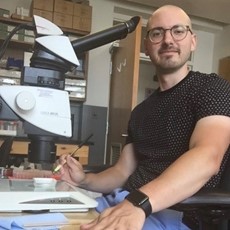 Aaron Ridall, (Dept. Biological Science. Advisor: Dr. Jeroen Ingels) will assess microplastics distribution in a local system and how the distributions change based on seasonal patterns and with proximity to local wastewater treatment plants, likely point-sources for microplastic pollution into the Gulf of Mexico. The effects of microplastics pollution are often considered for macro- and megafauna, but few works have attempted to assess the effects on benthic invertebrates. To expand this microplastics view, Aaron will focus primarily on nematodes, an abundant group of organisms with important roles in ecosystem function. Understanding how microplastics affect nematode assemblage dynamics would also provide information on the potential use of nematodes as ecological indicators of microplastics pollution. 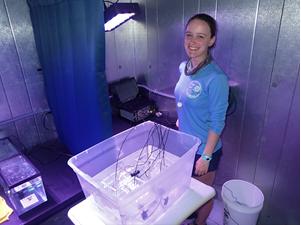 Second-year Ph.D. student Randi Bowman (Brooke Lab) has been awarded an NSF Graduate Research Fellowship to fund her research on the effects of stressors on trait diversity in coral reef ecosystems. Coral reefs are declining worldwide, but it remains unknown how these declines are affecting and are affected by functional diversity, a measure of biodiversity concerned with the traits of organisms that influence one or more aspects of ecosystem functioning. Randi aims to merge long-term monitoring data, laboratory experiments, and modeling to improve our understanding of the importance of trait variation on resilience in coral reef ecosystems. 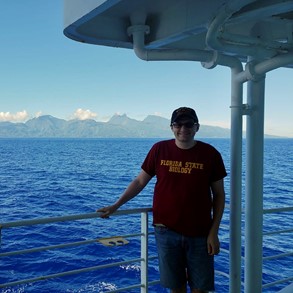 Ph.D. student, Joseph Horacek (Ingels Lab), has been awarded FSU's Dissertation Research Grant! This funding will allow him to sequence the DNA of the nematodes he collected from seamounts in the Southeast Pacific Ocean.  This data will be used to identify cryptic species, estimate connectivity and differentiation across populations, and understand the evolution of nematodes in the deep-sea.  Nematodes are categorized under meiofauna, which are minute invertebrates generally associated with the benthos, or bottom, of bodies of water. Through his research, he hopes to help academic and citizen scientists alike understand the role and importance of meiofauna in marine ecosystems.

Save our Seas Foundation 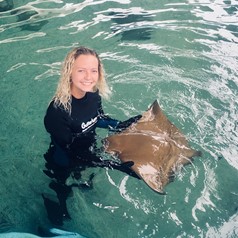 FSUCML graduate students Ashley Dawdy (MSc) and Blake Hamilton (MSc) received Small Grants from the Save our Seas Foundation to fund their research projects for this summer.  Ashley will be acoustically tracking adult and young-of-year cownose rays (Rhinoptera bonasus) in Apalachicola Bay to learn about their movement behavior and ecology. Her goal is to investigate their seasonal use of the bay area, which habitats they are occupying across different life stages, and where they go once they leave to better inform species assessment and management. Blake will be implanting acoustic transmitters in blacknose sharks (Carcharhinus acronotus), aiming to analyze seasonal and temperature-driven movement patterns from Florida Bay and the Florida Keys to summer foraging and parturition grounds in the northern Gulf of Mexico and Atlantic coast. Genetics studies indicate genetically diverged populations of blacknose sharks in both the 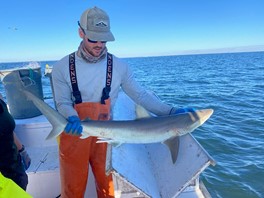 Gulf and Atlantic, but individuals from both populations have been found to occupy the Florida Keys, which are used as the spatial break for management zones of the two populations. He will supplement published genetic information with the movement data to understand how and when these two populations use the waters surrounding the Florida Keys, and quantify interactions between the two populations. This will be the first comprehensive study using acoustic telemetry technology with blacknose sharks and will contribute to knowledge necessary for enacting appropriate conservation and management measures.

Society for Integrative and Comparative Biology 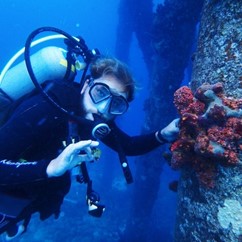 Ph.D. Candidate, Josh Manning, has been selected to receive the Society for Integrative and Comparative Biology (SICB) Grant-in-Aid of Research (GIAR) to support his project investigating the 'dear enemy' effect in the Stoplight Parrotfish (Sparisoma viride). He was also chosen to receive the with the William R. Dawson Award at SICB's 2021 virtual annual meeting! 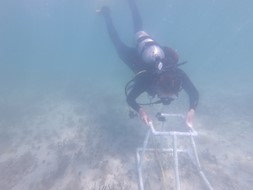 MSc. students Nika Blank and Blake Hamilton and Ph.D. student Aaron Ridall have allbeen awarded funding through the Southern Association of Marine Laboratories 2021 Lou Burnett Award . Nika will use this award to collect data on species composition, density and other metrics of hardbottom coral communities in Hernando county. The collected data will be combined with data off of the FSUCML and in the Tampa Bay area to create a more complete understanding of what these coral communities

look like and how they change as you move north to south. The SAML 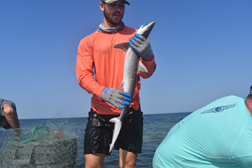 funds will contribute to Blake's research on the trophic ecology of elasmobranchs in Apalachicola Bay, FL. He is employing stable isotope analyses and Bayesian mixing models to determine the extent that fluvial and floodplain-based nutrients contribute to consumer biomass for 5 common shark species in this system. Aaron will use his funding to offset boating and sampling costs for his upcoming winter sampling session in Panama City Beach, where he is attempting to understand the 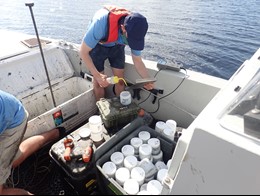 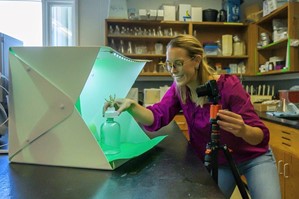 Abbey Engleman, a PhD student in Dr. Sandra Brooke’s lab, has recently been named a finalist for the 2021 John A. Knauss Marine Policy Fellowship Program.  This program offers a unique opportunity for graduate students to gain both educational and professional experience in national policy decisions affecting ocean, coastal, and Great Lake resources.  The 2021 fellowship class will place its 74 finalists into a “host” office within the legislative and executive branches of government.  The finalists will then work in these positions in Washington D.C. for a one-year paid fellowship.  Abbey’s current research focuses on understanding the drivers for ecosystem sustainability on coral reefs.  She uses 3D technology to understand how reef structure contributes to reef processes, such as coral recruitment. 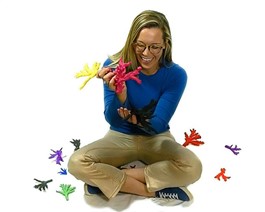 Her passion for translating science to society was the catalyst that initially drove her to pursue her PhD.  She wanted to deepen her understanding of the science she aims to communicate.  The Knauss Policy Fellowship is a perfect “next-step” as it offers an incredible opportunity to serve as a liaison between scientists and policy makers, to translate research into meaningful and actionable change.

Abbey will not learn of her host office assignment until this fall, but she is broadly interested in forging relationships between the government and NGOs -- to amplify the impact of research and elicit widespread adoption of more sustainable practices. She is eager to gain perspective on how the United States enacts policies surrounding conservation. She remarks, “The Fellowship offers unique exposure to this process, and the barriers or limitations to passing legislation, which will be invaluable for advancing my career goals.”

To learn more about the Knauss fellowship, and to meet the other finalists, click here