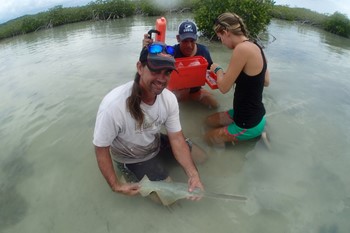 Sawfish are batoids, like skates and stingrays, and are most closely related to guitarfishes. The five living species of sawfishes are unusual in possessing an elongated rostrum with large, sharp, lateral teeth protruding from each side. This “saw” is used both for immobilizing prey and for protection. Some sawfishes reach up to 20 feet in length, making them the largest predator in the ecosystems where they occur. Sawfishes occur worldwide in tropical and subtropical marine environments.

The smalltooth sawfish (Pristis pectinate) became the first native marine fish to be listed as Endangered under the U.S Endangered Species Act in 2003. All five species of sawfishes (Family Pristidae) are Endangered or Critically Endangered according to the International Union for Conservation of Nature (IUCN) Red List of Threatened Species. Overfishing and habitat loss caused major declines in smalltooth sawfish throughout the subtropical Atlantic, including the United States. 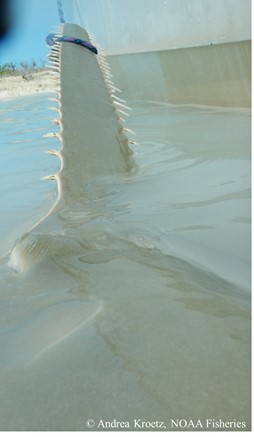 In our research of smalltooth sawfish, we seek to answer several questions about the life history and ecology of the species and to use this information to decrease fishery mortality. What are their preferred habitats? When, where, and how often to sawfish reproduce? When and where are sawfishes most susceptible to potential capture in commercial fisheries? Is there movement of adults between Florida and adjacent regions? To answer these questions, we tag and release sawfish with identification tags, passive acoustic transmitters, towed SPOT satellite transmitters, and pop-off archival satellite tags (PSATs). All of these tools provide information about the sawfish’s movement, which help us to assess spatial and temporal patterns of habitat use. We also collect blood samples to assess indicators of physiological stress to assess post-release mortality risk in different fisheries. With colleagues from Florida International University and the University of North Florida, we also use genetics to assess mixing of specific populations, and use cycling of sex hormones in blood to assess reproductive cycling and periodicity.

Our data to date suggest adult smalltooth sawfish use shallow backcountry mangrove and seagrass habitats (such as in Florida Bay) as well as habitats 45-70 meters deep off the edge of the continental shelf (in the Florida Keys). Sawfish are most susceptible to capture in commercial fisheries such as shrimp trawls when in the deeper shelf edge habitats. Use of these main habitats varies by season and sex of the sawfish, but preliminary data suggest mating may take place in the deeper habitats. Pupping and mating most likely take place in spring on a biannual cycle. Tagging data from more than 40 adult sawfish tagged in Florida suggest Florida sawfish do not leave U.S. waters and rarely leave Florida waters. Similarly, preliminary data from four sawfish tagged in the Bahamas suggest these sawfish remain in Bahamian waters. 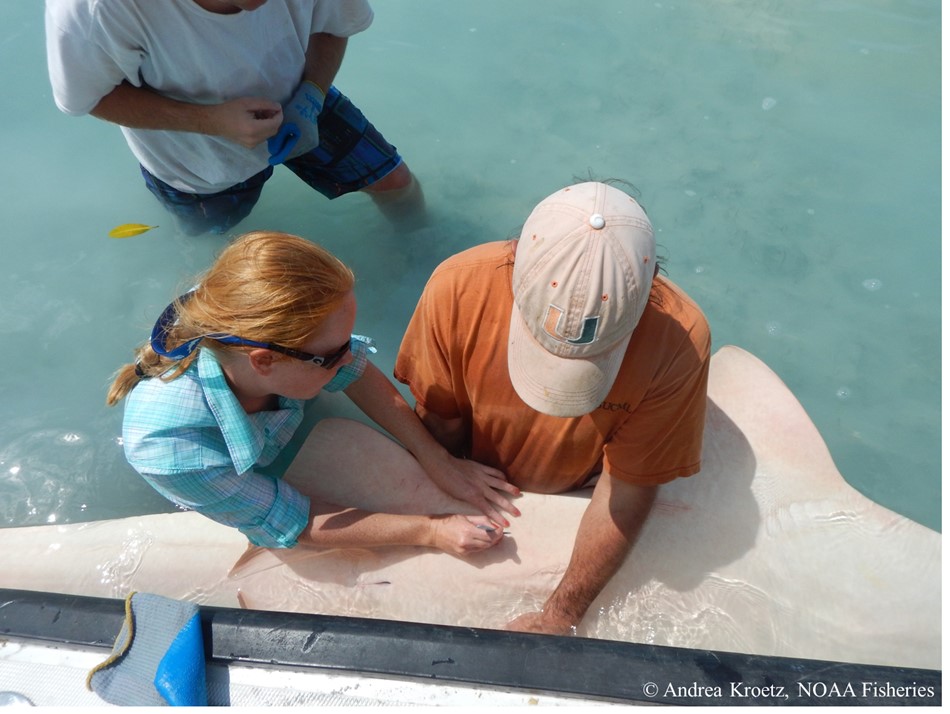