Florida State University established its first marine laboratory, the Oceanographic Institute, in 1949, on 25 acres on the harbor side of the peninsula that forms Alligator Harbor, about 45 miles south of Tallahassee.

In addition to the laboratory building—divided into a wet laboratory classroom and a room of research cubicles for use by staff, faculty, and graduate students—facilities included large concrete seawater tanks for keeping marine animals, a large pool 70 x 50 ft, 7 ft deep) constructed in 1954 to keep dolphins, a faculty residence building, a boathouse-shop, and a 300-foot concrete pier for docking small boats. The laboratory was equipped with five power boats (22 to 38 ft) and several skiffs. 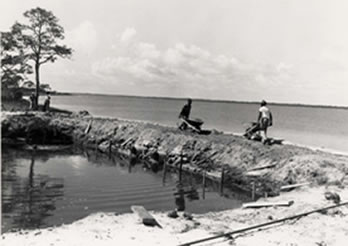 Other marine stations maintained by Florida State University until 1954 included one at Mayport, on the St. Johns River near Jacksonville, which conducted research related to the menhaden and shrimp fisheries and oceanographic problems of the Gulf Stream and the mouth of the St. John's River, and one on Mullet Key at the mouth of Tampa Bay, which studied red tide.

Past Directors of the Florida State University Oceanic Intitute

Winston Menzel spent his entire professional career at Florida State University, where he concentrated on molluscan aquaculture and genetics. His research ranged from projects in selective breeding and hybridization in clams and oysters to clam mariculture. He is noted for developing a management plan for the oyster resource in Apalachicola Bay with the Florida State Board f Natural Resources.

How to Donate to FSUCML