Beyond Providing a Food Source: The Ecosystem Services Provided by Oysters Have Direct Economic Value 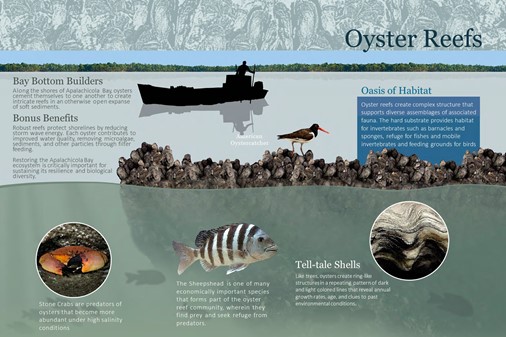 The Eastern oyster has played an enormous part in the history of Apalachicola. Their economic importance started an uptick in the mid-19th century, and culminated in the local oyster industry providing about 90% of all the oyster sold in Florida and 10% percent of those distributed throughout the United States by the latter part of the 20th century. Oysters came to represent the very fabric of Apalachicola's culture and the identity of its people.

In addition to their economic value and importance as a food source for humans, oysters have remarkable ecological value. They are considered among the most efficient and successful ‘keystone species’, which is a species that exerts strong influence on the diversity and structure of the communities within which they exist. Individual oysters are capable of filtering particles from the water column at a rate of about 50 gallons a day.  This leads to improved water quality, which in turn contributes to a healthy estuary and promotes the growth of sea grass meadows. Oyster reefs provide critical refuge, feeding grounds, and nursery habitat to many other economically and ecologically important fish and invertebrate species, and feeding habitat for shorebirds.

Oysters are also ‘ecosystem engineers’ - species that physically modify, maintain, or create habitats to which other species recruit. Oyster larvae settle en masse on hard substrate, including existing oyster shells, and can develop massive, architecturally complex reefs. These reefs create physical barriers that protect shorelines from the wave and storm energy that causes coastal erosion. Preserving these natural barriers can prevent the need for expensive and sometimes ineffective shoreline ‘hardening’ (installation of artificial structure) to protect coastal properties and roadways.

When critically important species, such as oysters, are lost from an ecosystem, the habitat and associated community shifts to a different state, which results in the loss of the economic and ecological services provided by that ecosystem. Protecting and restoring oyster populations is therefore vital to the health of the Apalachicola Bay System.