Field work is a critical component of the ABSI research agenda. Scientists from the lab travel to the Bay every week to gather information about the condition of oysters and the reefs on which they are found. 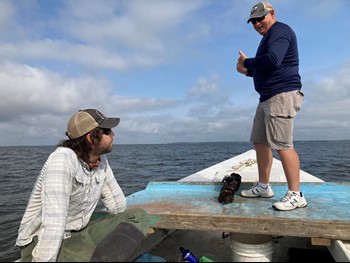 All of these experiments are informed by a rigorous monthly monitoring program undertaken by ABSI scientists on intertidal oyster reef sites in the  Apalachicola Bay System (Alligator Harbor, Carrabelle River, East Cove, St. Vincent Sound) and by the Florida Fish and Wildlife Conservation Commission on subtidal oyster reefs in Apalachicola Bay. During monthly sampling expeditions, the scientists collect oysters from each site and bring them back to their respective labs to evaluate three important attributes:

(1) the average oyster condition (a measure of the ecophysiological state of the sampling site)
(2) disease prevalence, especially of Dermo (Perkinsus marinus), a protozoan parasite that affects oysters throughout the Gulf of Mexico; and
(3) reproductive condition and potential.

Oyster condition and biochemical attributes are affected by such things as the regional density of oyster reefs, temperature, salinity, pH, amount of organic matter and environmental factors. It is determined by comparing the wet and dry weights of oyster flesh and shells. 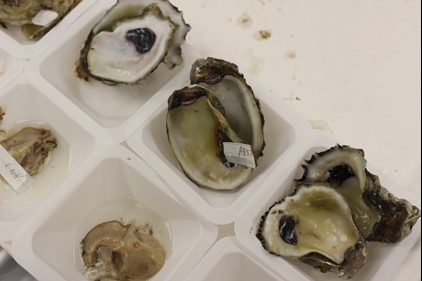 Disease prevalence is determined using a histological process akin to what one might expect to see in a hospital lab. Scientists take a small cross section of the oyster's mantle (the tissue surrounding the oyster body that is used to create the shell), place it on a microscope slide, and stain it with iodine. Parasites such as Dermo absorb more stain than does the oyster tissue in which it is embedded so that they appear darker and can easily be counted. Why the focus on Dermo? Because it thrives in high salinity conditions and poses a major threat to oysters in the Gulf of Mexico causing high levels or mortality.  Further, it appears that the larger, older oysters are more susceptible to Dermo than smaller oysters (Powell et al. 1997). Reproductive condition and potential are determined in a similar manner, except reproductive tissue is used and eggs and sperm are counted instead of parasites.

Additionally, spat traps (as seen in the image to the right) are deployed at each site and checked monthly to determine how many young oysters are recruiting to an area. 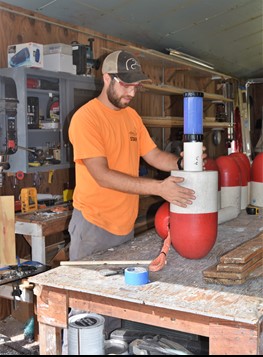 The spat traps are simple structures made out of oyster shells that offer a place for oyster larvae to settle and develop into spat, which are then counted by researchers. Last month’s sampling indicated that oysters are beginning to settle on intertidal reefs. ABSI staff are hopeful that our monitoring efforts will reveal that even more spat will settle in the coming month as we move into fall.

Finally, we have deployed water quality loggers in the passes of the Apalachicola Bay System, St. George Sound, and Lake Wimico. They record conditions such as pH, temperature, dissolved oxygen, and turbidity, which will be used to inform a model that can explain how water masses move through the Apalachicola Bay System. Additionally, researchers can test for correlations between water quality and oyster condition.