The life of an Eastern oyster (Crassostrea virginica), like that of a human, begins when an egg is fertilized by a sperm. This happens typically on an oyster reef when males and females -- otherwise identical in outer morphology -- respond to environmental cues of temperature and salinity that cause them start reproducing when their food (algae) is likely to be most abundant. Once the first male releases sperm, it ​causes other males to follow suit, simultaneously triggering females to cast millions of eggs into the water column, all coming together to form a milky cloud rising away from the reef.

While not yet visible to the naked eye, the planktonic fertilized egg drifts in the water column, rapidly dividing to become a multi-cellular free swimming larva. It continues cell division through several larval stages, eventually developing a foot that precipitates its drop to the seafloor where it crawls along the bottom searching for suitable hard substrate on which to settle. When the sought-after substrate is encountered, they attach to it with a glue-like substance and metamorphose into a spat. A spat (so called because "spawning" is considered reminiscent of "spitting") is a young oyster that is attached (sessile) and starts forming a shell.

The oyster typically grows at a rate of about an inch a year, reaching sexual maturity somewhere between one and three years of age. It will spawn from late June to November, peaking in June and July. 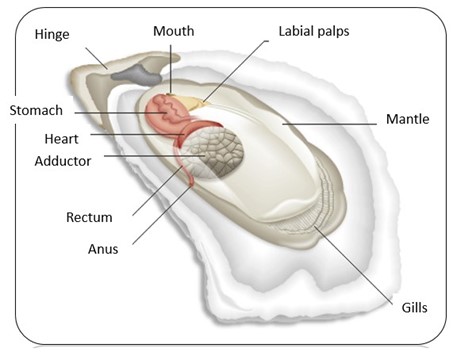 Oyster internal anatomy is rather simple in appearance and yet functions in a remarkable, highly specialized fashion that allows them to extract oxygen and tiny food particles from water passing over their gills  and the mantle (tissue surrounding the entire body that produces the oyster shells). The food particles are bound in mucus and moved from by cilia covering the gills towards the hinge and into the mouth and from their to the stomach. Once the nutrients are removed, the remaining material passes out the anus into the body cavity as feces.  Particles not considered edible (e.g., sand, detritus, or food particles too big to eat) never enter the digestive tract.  These "pseudofeces"  are bound in mucus, accumulate in the mantle cavity, and are periodically forcibly ejected from the mantle cavity with actual feces, sinking to the sea floor as 'biodeposits".

Oyster deposition of feces and pseudofeces on the bottom can benefit estuarine systems, often plagued by eutrophication, by reducing available nitrogen in the water column. This is only one of a number of ecosystem services that these marvelous organisms can provide.