Freshwater Inflow Modeling from the Apalachicola River to the Bay

Freshwater inflow from the nearly 20,000 square mile Apalachicola-Chattahoochee-Flint watershed influences both the salinity and nutrient levels in Apalachicola Bay.

Because the majority of the ACF watershed is located in Alabama and Georgia, the volume of water entering the Apalachicola estuary is more influenced by climate, water management actions and consumptive uses in Georgia and Alabama than by precipitation in Florida.

Through the use of system models, it is possible to address how freshwater inflow to the Apalachicola estuary could change in the future under modified reservoir management practices, different levels of consumptive withdrawals, and changing climate. The intent of using a systems model approach is to quantify the effects of changing management actions and consumptive demands in the future and to use model output for the salinity model.

When the volume of flow in the ACF basin is compared to the capacity of water storage in the reservoirs, it becomes apparent that there are limitations to the ability of the ACF reservoir system to store and release water. For example, the mean flow in the Apalachicola River is comparable to that of the Colorado River, yet the Colorado basin has over 40 times more storage capacity than that of the ACF basin. This limitation begs the question, to what degree is inflow defined by reservoir management and water use and to what degree by climate? How much controld do we have over freshwater inflow?

The freshwater inflow modeling under ABSI’s work will use the existing ACF STELLA model. This model was first developed as part of the negotiations which led to formation of the ACF River Basin Compact[1] and has been used on multiple other projects in the watershed, including development of the Biological Opinion on the Endangered Species Act for the current Water Control Manual. The version used in the ABSI project has been calibrated with the U. S. Army Corps of Engineers HEC ResSim model of the basin, demonstrating that there is excellent agreement between the two models for the ACF as well as for reservoir outflows and elevations at Lake Lanier, West Point Lake, W.F George Lake, and Lake Seminole. 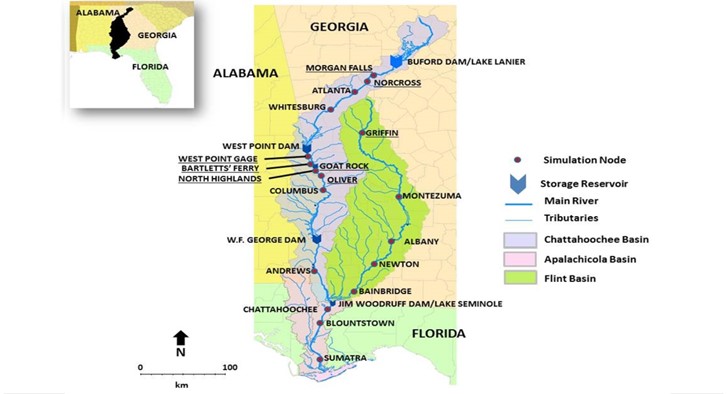 The decision to use the ACF STELLA model in ABSI was based on the fact that it is a daily time-step model, it has a fast run-time (15 seconds for 74 years of model data) and it is highly flexible model, allowing us to examine a broad array of management, consumptive use. and climate scenarios.
At the base of the STELLA model is an unimpaired flow set which is an estimate of what flow in the basin would have been without any consumptive extractions or reservoir management. The unimpaired data base extends from 1939 through 2012 and was developed by the U. S. Army Corps of Engineers and the staff in the states of Florida, Georgia and Alabama. The model then allows one to add consumptive demands, alternate reservoir management rules, and/or alternative climate scenarios to see how they would affect flow entering the Apalachicola River. The model divides the watershed into a set of reaches shown on the image to the left.

What is Better? What is Worse?

One of the challenges in examining freshwater inflow is defining what is better. Historically the concept of “pre-dam flows” or historical flows has been proposed as a standard of acceptable. One of the keys of the relationship between flow and the ecological health of Apalachicola River and Bay is the relationship between the river and its floodplain. And this is where it becomes a bit more complicated. 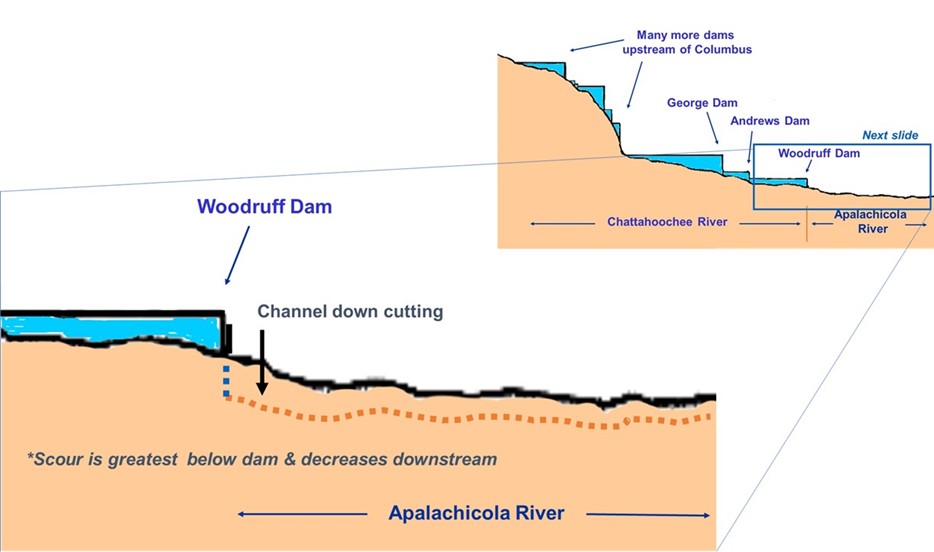 The elevation of the river bed of Apalachicola River has not been stable since construction of Jim Woodruff Dam was completed in 1955. The river bed has degraded or dug down about 6 to 7 feet just below the dam and signs of this degradation (albeit to a lesser magnitude) are still evident 70 miles downstream and over flows exceeded only 25% of the time (e.g. river bed degradation is not just a low flow phenomena). Some of this degradation can also be attributed to the maintenance of the federal navigation channel in the Apalachicola River.

The intent of this model is to understand how these and other changes have modified flow reaching the bay below the Jim Woodruff Dam and to find ways to modify that flow that will benefit the river, the floodplain, and the Bay.  The river basin model will be used in the ABSI project both to educate the CAB the capacity of water management actions to deliver more flow to the Apalachicola estuary and to propose to the managers of the Federal water project, the U.S. Army Corps of Engineers modifications which can be made to the current Water Control Manual to enhance the sustainability of the oyster population in Apalachicola Bay.

[1] An interstate compact between Alabama, Florida and Georgia that encourages these states to coordinate legislation and state actions that affect the Apalachicola-Chattahoochee-Flint (ACF) river basin. The compact's goal was to better organize oversight of the river basin and promote more unified water planning.