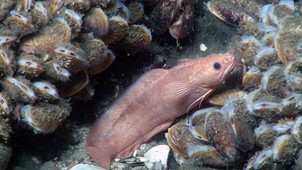 Chemosynthesis is the conversion of carbon (usually carbon dioxide or methane) into organic matter using inorganic molecules (hydrogen or hydrogen sulfide) or methane as an energy source. Most energy is initially derived from sunlight via plant photosynthesis. Chemosynthesis is usually found in places that are high in methane and low in oxygen, where bacteria can use these conditions to make energy. Some very specialized marine animals have bacteria in their tissues, which use the methane and/or sulfides to make energy that feeds the host, generally a type of clam, mussel or worm. 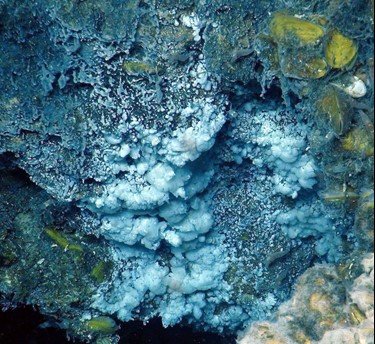 In some places, geological conditions create high levels of methane and sulfides, which seep out of the sediment. These are called cold seeps, which are similar to the warm hydrothermal vents found near tectonically active margins and underwater volcanoes. Prior to our Atlantic Deepwater Canyons project, there were only two confirmed cold seep areas in the western Atlantic. In 2011-2013, NOAA identified 570 bubble plumes during mapping cruises in the region, which are indicative of active methane release. In addition to the corals, we found two cold seeps during our Atlantic Deepwater Canyons project, one in Baltimore Canyon at ~425 m and the other in Norfolk Canyon at ~1500 m. Both of these areas were populated by the same species of seep mussels (Bathymodiolus childressi), which have chemosynthetic bacteria in their tissues. These animals are endemic to seeps and cannot live on normal soft sediment. Although the mussels occurred at both seeps, the other fauna differed between sites. Notable examples were a high abundance of commercially valuable red crabs at the shallow Baltimore Canyon site, and a very abundant sea cucumber (which is endemic to seep habitats) living among the mussel beds at the deep site off Norfolk Canyon. Our lab is studying the community structure of these seep communities, mapping the location and mating habitats red crabs and analyzing the reproductive cycles of the seep mussels.