In depths of 50 m or greater Oculina varicosa lacks zooxanthellae, the symbiotic algae that gives corals their color and part of their nutrition; it is therefore white at these depths and relies solely on planktonic food.

Fifteen to thirty miles off the central east coast of Florida in water depths of 70 to 120 m Oculina exists as a series of pinnacles and ridges that rise 10 to 29 m off the bottom and extend from Ft. Pierce to Cape Canaveral. They are derived from ancient shoreline features, and form the foundation of an extremely diverse community that is structured by Oculina. The thicket-like growth pattern of Oculina on these pinnacles provides complex interstices that allow high biodiversity of molluscs and crustaceans (Reed et al. 1982, Reed and Mikkelsen 1987, Gilmore and Jones 1992).

The habitat also provides significant spawning grounds for economically important species of reef fish. Populations of fish on the Oculina Banks observed prior to significant fishing of the area were impressive. Gag, scamp, Warsaw groupers, snowy groupers, speckled hind and amberjack were abundant and large. 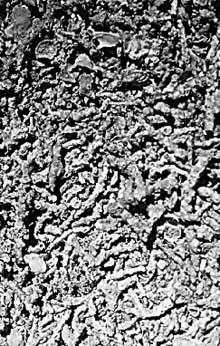 Much of the Oculina habitat off Florida's east coast is completely destroyed. This habitat loss is at least in part due to mobile fishing gear (trawls and dredges) and anchoring activities. Much of the structural damage occurred 25 to 30 years ago. Foreign trawlers operated on the east Florida shelf before the Magnuson Act of 1976 and American trawlers targeted rock shrimp and scallops after this time. The damage ranges from toppled and broken coral heads to dead coral rubble, the individual pieces of which rarely exceed 2-3cm in length (Koenig et al. 2000). When observed from a submersible in 1995, after a decade of intense fishing, the Banks were depleted and only a few small fish remained. Most disturbing was the observation that the massive grouper spawning aggregations were reduced to just a few small individuals. Because recovery of fish populations depends on habitat condition, mapping is essential to characterizing health of spawning stocks

The entire Oculina Banks, some 300 square miles, was set aside as a Habitat Area of Particular Concern (HAPC) by the South Atlantic Fishery Management Council. The HAPC designation protects the remaining habitat from mobile fishing gear and from other potentially damaging mechanical impacts. In addition, the lower portion of the HAPC, called the Experimental Oculina Research Reserve (EORR), was closed to bottom fishing in 1994 for a period of 10 years to allow scientific studies on the recovery of fish populations and grouper spawning aggregations. In 2003, all shrimp trawlers were required to use vessel monitoring devices (2003) to ensure that they did not breach the boundaries of the reserve. The reserve closure period was renewed in 2004 for an additional 10 years.

Studies conducted thus far include the mapping of live versus destroyed Oculina habitat, comparison of present habitat condition with that observed 20 to 25 years ago, and quantitative characterization of the living habitat both within the reserve and in reference sites outside of the reserve. Also evaluated are the condition of the fish populations in the EORR before and after closure to bottom fishing. Experimental evaluation of Oculina habitat restoration began in 2000. 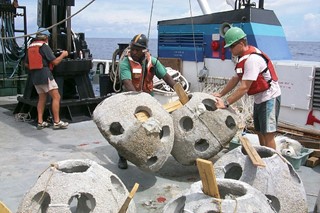 Additional studies include determining whether Oculina habitat would recover on its own, or if recovery would require human intervention. To determine the efficacy of human intervention (providing artificial settlement sites for coral larvae), we distributed reef balls and other artificial structure in areas where Oculina thickets once existed. The balls were seeded with transplants of live Oculina colonies to evaluate the potential for colony growth, survival, and recruitment in destroyed and intact Oculina habitat. Our preliminary study verified the effectiveness of transplantation.

The study also monitors fish abundance and community structure at artificial transplant modules, which are also designed as coral-head-simulating structures. They provide habitat complexity where none exists in the destroyed areas. The slow growth rate of Oculina, 1 to 2 cm per year, suggests that the successful establishment of Oculina thickets, if it occurs, will take decades.