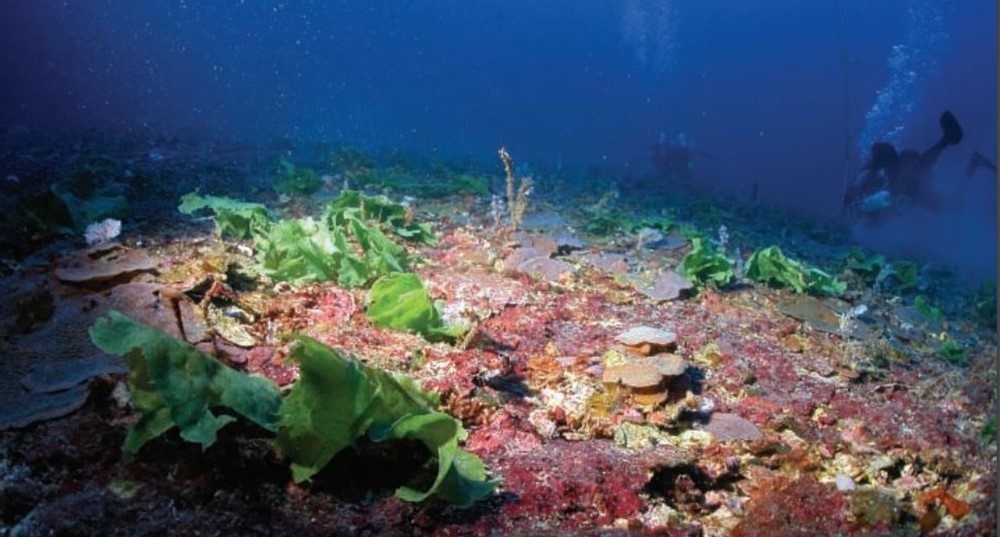 Pulley Ridge1, a 100+ km-long series of drowned barrier islands2 on the southern end of the West Florida Shelf, is the deepest known photosynthetic coral reef on the U S. continental shelf. Spanning depths of 60 to 85 m, it hosts an unusual array of zooxanthellate scleractinian corals, green, red and brown macro algae, and tropical fishes more typical of shallower depths. While fishermen have known about and fished around the region for decades, its exploration is relatively new to science. 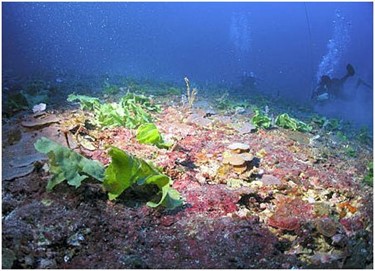 The fish fauna of Pulley Ridge represent both shallow- and deep-water species. More than 60 species have been identified. Commercial species include red grouper, scamp, and hogfish. Typical shallow-water tropical species include bluehead wrasse, bicolor damselfish, coney, French angelfish, and rock beauty. The deepwater fauna is represented by bank butterflyfish, deepwater squirrelfish,spotfin hogfish, roughtongue bass, and wrasse bass. Malacanthus plumieri (sand tilefish) and several other species construct large burrows and mounds that serve as refuge for multiple species. Mounds and pits larger than 1m2 are apparent on side-scan sonar images and have been counted in excess of 200/km2 for parts of the ridge. 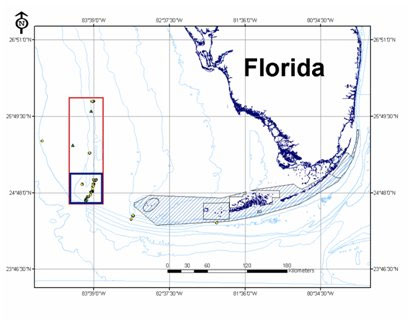 The extent of algal cover and abundance of herbivores suggest benthic productivity is remarkably high on parts of the ridge. This level of productivity, while unusual at this depth, can be attributed to several characteristics of the region: (1) the underlying drowned barrier islands provide both elevated topography and lithified substrate on which the hard bottom community can develop; (2) the region is dominated oceanographically by the western edge of the Loop Current which delivers relatively clear, warm water; and (3) the ridge lies within the thermocline, a water mass known to provide nutrients during upwelling to shallow reefs in Florida.

To read our full report on Pulley Ridge fishes, from a 2005 study conducted for the NOAA Coral Reef Program, go to this site: http://www.gulfcouncil.org/Beta/GMFMCWeb/downloads/Coral Final Report Pulley Ridge - FSU 2002.pdf

2 The corals cover an island that was submerged 13,000 years ago