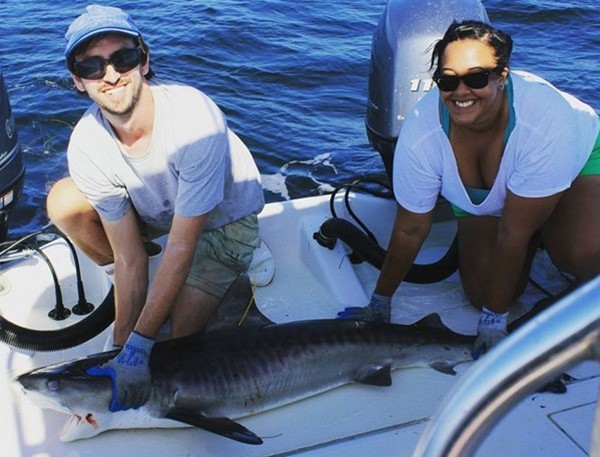 Ale received her BS in Biology with a focus on Marine Biology. Under the advisement of Dr. Chris Stallings, she developed a love for marine science and research through her undergraduate work on seagrasses. After taking a few years to work as a Marine Technician for the FSUCML, Ale pursued her Masters in Oceanography, in Biogeochemistry tract under the guidance of Dr. Dean Grubbs and Dr. Jeff Chanton. 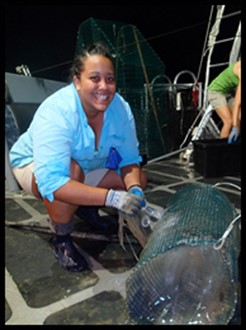 Born and raised in Lima, Peru, Ale developed a deep love for the ocean and sea life, spending most summers at the beach with her family. When she was 15, her family emigrated to the United States and settled in central Georgia. In an effort to get back to the coastline, Ale decided to begin her college career at Florida State.  While working on her Masters thesis on the trophic ecology and bioaccumulation of mercury in Gulf of Mexico hagfishes, she was selected as a science policy fellow for the Gulf Research Program’s Science Policy Fellowship program of the National Academies of Science, Engineering, and Medicine.  She was then placed in the U.S. Fish and Wildlife Service Natural Resource Damage Assessment and Restoration (NRDAR) office in Fairhope, Alabama.

This fellowship offered Ale a first glimpse into the interaction between science and policy –it applied her background in fieldwork and research to ecological restoration of affected resources. This experience then acted as a springboard 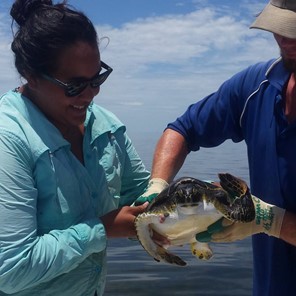 to her current position at National Oceanic Atmospheric Administration (NOAA) in the Damage Assessment Remediation, Restoration Program (DARRP). DARRP is a division of NOAA that acts on the behalf of the American public to hold parties accountable and restore injured natural resources that result from oil spills or hazardous waste releases. As a Marine Habitat Restoration Specialist, Ale aids in the development, coordination and implementation of monitoring and evaluating metrics of projects implemented across the U.S., as well as manage data and coordinate with co-trustees and partners on the most effective ways to implement and fund these projects. She also provides scientific research and programmatic support primarily for the southeastern United States.

While Ale has always had a soft spot for promoting and educating the public on sustainable fishing practices, after working in her new position at NOAA, she is very interested in environmental justice issues. Many of the hazardous incidents she works on occur around disadvantaged communities, bringing her to the realization that scientists and natural resource managers, need to better understand how the work they put forth, whether its new policies and regulations or restoring injured species and environments, affects the communities that were directly or indirectly affected by the disaster at hand. 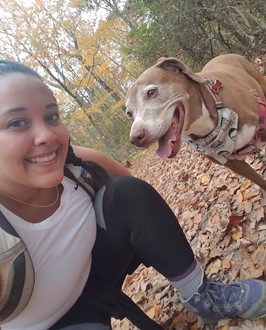 Ale now resides in D.C. with her gorgeous dog, Tess! Tess and Ale actually met at FSUCML  in January 2010.  FSUCML staff Justlin Lewis and Mark Daniels spotted a puppy walking around the boat ramp across the basin. After the staff cared for her at the lab, Ale took her home and worked to try and find her owners. Although she wore no collar, she was very well taken care of, so FSUCML students and staff posted fliers around the area and contacted Franklin and Wakulla county animal shelters to see if anyone had reported a lost puppy. After a few weeks of no response, Ale officially adopted Tess, named for where she was found, St. Teresa. 10 years and countless moves later, they are as happy as can be!

Her advice to current FSU students is: “You’ll regret more the things you didn’t do than those you took a chance on - so take those chances. In my experience, they have led me to places I didn't know I wanted to be.”