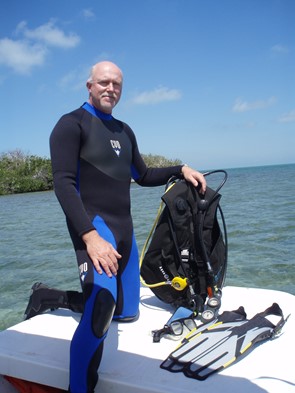 Dr. Mark Butler, a 1988 Ph.D. graduate from FSU, is currently a Professor and Eminent Scholar at Old Dominion University in Norfolk, Virginia. Mark was one of the first “Saturday at the Sea” (SATS) graduate student assistants and he studied under former FSUCML Director, Professor William "Doc" Herrnkind, who was his graduate advisor. Mark has received many accolades for his work, most notably in 2011, when he received the Virginia State Council of Higher Education's “Outstanding Faculty Award,” the highest honor for university faculty in Virginia.

Originally from Ohio, Mark got his first taste of the sea - literally - as a toddler back in 1958 during a family outing at Cocoa Beach, while his father was stationed at McCoy Air Force Base in Orlando, FL. Mark has been a "water baby" ever since and still calls Florida his “second home.” After completing an undergraduate degree at Wittenberg University (Springfield, OH) and a Master's degree at Ohio State University, Mark arrived at FSU in 1983 to join “Doc” Herrnkind's laboratory as a Ph.D. student.

Although much of his research took place in the Florida Keys, Mark was one of the first "Saturday at the Sea" (SATS) graduate student assistants. He spent many weekends at FSUCML leading eager bands of SATS students and amazing them with various activities. He guided them on interpretive walks along the shore and brought them aboard pontoon boats pulling trawls that brimmed with sea life.

"I remember the first day I met the FSUCML office secretary, Mary Westberg. She asked me where I was from and when I answered ‘Ohio State’, she replied in a sweet southern accent, ‘Oh, so you decided to come to a real football school!’ Back then the FSUCML office was on campus; there was just one office staff person, a couple of on-site staff, and no on-site faculty. I've had the pleasure of visiting the 'new' FSUCML a couple of times over the past few years. It is a much bigger operation now than when I was a student, and it’s become a tremendous asset for FSU and the State of Florida. Despite its transformation, I still appreciate the ambiance of the old FSUCML dorms and of course the beauty of the Nature Coast."

Under “Doc” Herrnkind, Mark studied the behavioral ecology and recruitment of Caribbean spiny lobster, and their importance to the management of one of Florida's most economically valuable species. He continues that research at Old Dominion and has since gone on to study the species' reproduction dynamics, larval ecology, and population connectivity in the Caribbean. Recently, Mark and his colleagues discovered and mapped the spread of the first viral disease known to infect spiny lobster. Where prevalent, the disease can significantly reduce fishery landings, but is not a threat to human health. Mark and his research team have also documented how lobster behavior reduces transmission among lobsters, a phenomenon called "behavioral immunity.”

To learn more about Mark Butler’s research at Old Dominion University, check out his lab page.