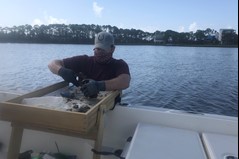 Over the past two months, the ABSI research team has been conducting oyster reef and oyster density samples from different locations in the Apalachicola Bay System (ABS).  Last week, the oyster density sampling was finished for the year, giving the team strong data sets on oyster density, condition, disease, and reproductive measures.  Additionally, they have completed subtidal sampling throughout most of Apalachicola Bay with the exception of East Bay, which should be completed before the holiday break. 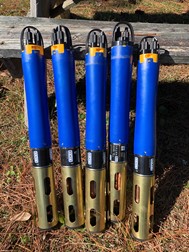 Along with the completion of oyster density sampling came the deployment of six YSI data loggers.  These data loggers were placed throughout the ABS at Indian Pass, West Pass, East Pass, Apalachicola River, St. George Sound, and Lake Wimico. They will be used to collect water quality samples of temperature, pH, salinity, conductivity, dissolved oxygen content, and turbidity (water clarity) as part of ABSI’s long-term water quality monitoring. These data loggers will allow the research team to take the water quality data and pair it with biological data they’ve collected, to better understand how the biological processes within the ABS are functioning and changing. This valuable data will help the ABSI gain insight on oyster recruitment and survivability, as well as help make inferences on oyster predator interactions and diseases.

Finally, the ABSI team has been collecting fishes near oyster reef sites including, Atlantic croaker (Micropogonius undulatas), Bay anchovy (Anchoa mitchilli), and Silver perch (Bairdiella chrysoura), through the use of gill nets and otter trawls. The fishes will be sent to collaborators who will perform a stable isotope analysis to determine if the nutrient input of the ABS has shifted away from terrestrial inputs towards marine inputs due to decreased freshwater flow. The ABSI team has also collected samples of adult oysters for an analysis of population genetic structure. These samples and others from outside the area will tell us whether the ABSI oysters are part of a single population within the northeastern Gulf of Mexico, or whether they form their own sub-population. It is important to understand whether there are local adaptations that should be preserved within the Apalachicola Bay System.

In the New Year, the team will continue to analyze the intertidal and sub-tidal oysters to help understand how these communities respond to environmental conditions. They will also begin experiments that will provide insight into oyster reef restoration approaches.