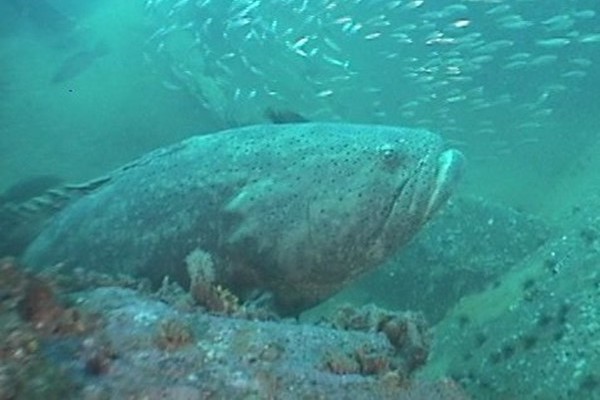 The Atlantic Goliath grouper is a native species that evolved on reefs on both sides of the Atlantic over millions of years. It is a natural and integral component of Florida's reef ecology and thus is essential to the health and biological diversity of the ecosystems they inhabit. It is the largest of the grouper species, reaching about 455 kg (800 lbs) and over 2 m (~6 ft) total length. Adults are relatively long-lived, with individuals at least 37 years old found in exploited populations. It is possible, however, that older fish occurred in unfished populations.

Goliath grouper have a pelagic larval duration of approximately 6 weeks. They settle in shallow mangrove habitat, first in mangrove leaf litter, and then along mangrove shorelines. This habitat is absolutely essential to their survival and ability to recruit to adult populations. The juvenile stage lasts 5 or 6 years in this mangrove habitat, after which fish egress to shallow reefs, eventually joining adult populations offshore. Their distribution in mangroves depends on local water quality, particularly dissolved oxygen content (> 4 ppm), mid-range salinities (> 10 ppt), and warm water (> 51ºF = 11ºC). This species is vulnerable to low water temperatures which have been known to wipe out entire year classes when falling below 51ºF.

This species occurred historically in tropical and subtropical waters of both the western Atlantic (both coasts of Florida, the Gulf of Mexico, the Caribbean south through the coasts of Brazil) and the Eastern Atlantic off the coast of tropical East Africa. Populations are on decline throughout their range and have all but vanished from East African waters.

Low-relief natural reefs, high-relief artificial reefs, and shipwrecks that dot the east and west Florida shelves, provide the architectural complexity that Goliath Grouper and many other reef fishes seek. Goliath Grouper enhance the structural complexity of these sites by excavating sediment from around the reef base, and in so doing, increase the abundance and diversity of other resident species. Most adult Goliath Grouper are found either alone or in small groups in relatively shallow water on these reefs and wrecks outside of the spawning season. They migrate during the summer often up to 100 km from inshore to spawning sites occurring at depths up to 50 m. Here, they aggregate in groups of roughly 100 individuals typically on rock ledges, isolated patch reefs, or ship wrecks. Spawning occurs from July through September in the northern hemisphere and from December through February in the southern hemisphere.