Our coastal shark research focuses on the seagrass habitats of the Florida Big Bend, the coastline of which is bordered by one of the world’s largest continuous seagrass beds. During the warmer months of the year this habitat supports a diverse array of fishes, with representatives of at least 34 taxonomic families. In our survey to date we have captured 56 species of bony fishes and 14 species of elasmobranchs (the sharks, skates, and rays). Our research is focused on the community ecology and trophic dynamics (feeding and food webs) of this system. 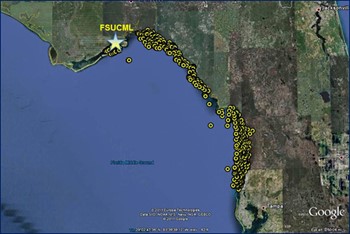 We sample the coastal habitats of the Big Bend using a spatially-balanced randomized survey design and two gear types, which are fished concurrently at each sampling station. We sample at least 40 stations every summer throughout the Big Bend, in addition to year-round monthly sampling conducted at two fixed stations off the FSUCML. Our gear includes an experimental gillnet and an experimental longline, each with a range of mesh and hook sizes, which allows us to catch a broad size range of sharks from neonate Atlantic sharpnose sharks (Rhizoprionodon terraenovae) to mature tiger sharks (Galeocerdo cuvier). The gillnet portion of our work is part of a collaborative project with NOAA NMFS in Panama City, called GulfSPAN (Gulf of Mexico States Shark Pupping and Nursery Area), with the primary goal of identifying areas and habitats of high relative importance to juvenile coastal sharks. 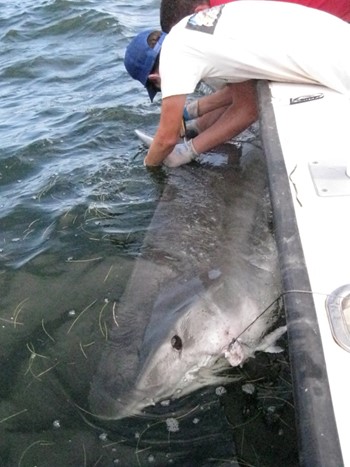 Two species of fishes dominate this habitat: the hardhead catfish (Arius felis) and the Atlantic sharpnose shark. These two species, alone, made up 58% of our total catch from 2009 to 2012. Bonnethead sharks (Sphyrna tiburo), blacktip sharks (Carcharhinus limbatus), and gafftopsail catfish (Bagre marinus) are the next three dominant species, which made up an additional 22.4% of our total catch in the same time period.

Community composition of these fishes varies with depth, water clarity, and salinity; the latter two of which are correlated with latitude in the Big Bend. Our results suggest an ecological gradient that culminates in a distinct faunal zone in the southern Big Bend, which we hypothesize is related to reduced river influence in this area. Additionally, there is evidence for nursery habitat in the Big Bend for at least two species of sharks: blacktip sharks and blacknose sharks (Carcharhinus acronotus).

Results of stable isotope analyses, through which we use the relative concentrations of heavy and light nitrogen and carbon isotopes to infer a species’ position in the food web, suggest a complex food web in the Big Bend. Large shark species that feed on relatively high proportions of other sharks and rays occupy the highest positions in the food web, while small bony fishes occupy the lowest positions. Results of our work also suggest that the catfishes, especially gafftopsail catfish, are indeed among mid-level predators such as Atlantic sharpnose and blacknose sharks. 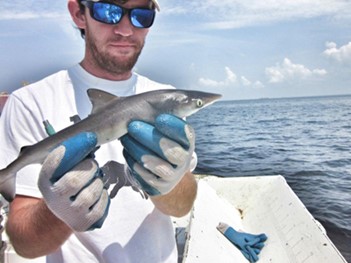 The results of our work represent the only in-depth study of large marine fishes in the Big Bend. As much of this habitat is pristine, we have collected potentially valuable baseline data which could be used in evaluation of management actions in the future. We plan to continue our surveys in the Big Bend as a means of long-term monitoring, and our data have and will be used in stock assessments for at least four species of sharks (three members of the small coastal shark complex: Atlantic sharpnose, bonnethead, and blacknose sharks; and one member of the large coastal shark complex: blacktip sharks).