The goliath grouper, Epinephelus itajara, is a large saltwater fish which can reach extremely large sizes, growing to lengths of 8.2 ft. (2.5 m) and weighing as much as 800 lbs. (363 kg). It has a broad head, round tail, small eyes, and short dorsal spines. It tends to have a brownish-yellow or greenish-gray speckled pattern and small black spots on its fins. 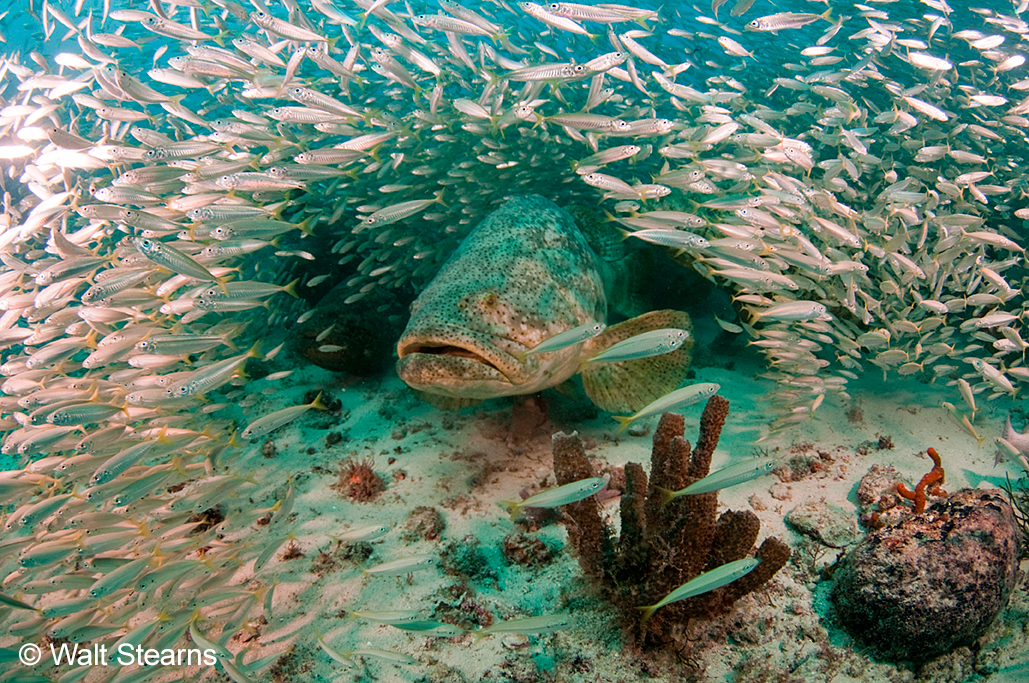 Juveniles can live in brackish estuaries, canals, and mangrove swamps. As they mature, they move to shallow, sub-tropical or tropical waters among coral or artificial reefs. Their range includes the Florida Keys, the Bahamas, most of the Caribbean, and almost the entire Brazilian coast. Rarely, they are seen in New England off Maine and Massachusetts. In the eastern Atlantic Ocean, they can be found from Congo to Senegal.

Because of its large geographic distribution, the goliath grouper is considered an umbrella species, meaning that its survival ensures the survival of other species that share the habitats within which it is found. It keeps habitats from being destroyed and is important to maintaining balance in the ecosystem. The protection of mangrove habitat is essential for the survival of the goliath grouper and other animals and plants living in the same community.

It takes goliath grouper five to six years to reach sexual maturity and until that time, they remain in mangrove habitat. As they mature, they move to shallow reefs. They tend to spawn in large aggregations, returning to the same locations each year. Goliath grouper are believed to be protogynous hermaphrodites, with individuals first maturing as females and then changing sex to become males.

The goliath grouper faces several threats including overfishing, destruction of habitat, red tide, and cold temperatures. Because it takes so long for goliath grouper to reach sexual maturity, they have trouble rebounding from these threats. Their numbers have dipped so low that much needed conservation laws have been set in place to help them recover.

The goliath grouper is entirely protected from harvest in the United States and is recognized by the World Conservation Union (IUCN) as a critically endangered species throughout its range.