When you come face to face with a manatee, it is hard to imagine that anyone ever mistook one for a mermaid (forget for a moment that mermaids do not even exist). The West Indian manatee is a large, gray marine mammal with a wrinkled face, a snout covered with whiskers, two forelimbs shaped like flippers to propel itself through the water, and a body that tapers to a flat, paddle-shaped tail. The average adult manatee is about 10 feet (~3 meters) long and weighs between 800 and 1,200 pounds (350-550 kg).

While there are three subspecies of West Indian manatee identified by their geographic ranges: (1) those from Florida and the Greater Antilles; (2) those from Mexico, Central America and northern South America; and (3) those from northeastern South America, we are most interested here in the Florida manatee. 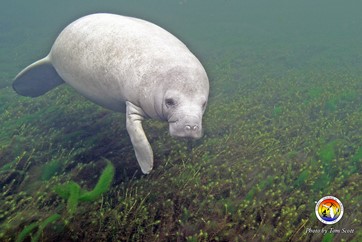 Florida manatees frequent shallow, slow-moving rivers, estuaries, saltwater bays, and canals, and migrating along the coast throughout the year. During the winter, they concentrate in Florida, and are found even in the boat basin of the Florida State University Coastal and Marine Laboratory, as well as in the Ochlocknee, Sopchoppy, Wakulla, and St. Marks rivers and Wakulla Springs. In the summer, sightings have become more common along the coasts of Alabama, Georgia, and South Carolina, but they might move as far west as Texas and as far north as Massachusetts.

Manatees are gentle and sluggish, spending most of their time either resting or eating. While they feed primarily on submerged, emergent, and floating plants, making them herbivores, they sometimes swallow small fish and invertebrates incidentally while browsing. They can consume 10-15% of their body weight daily. Because they are mammals, they must surface to breathe air.

West Indian manatees have no natural enemies, and can live for 60 years or more. As with all wild animals, part of their mortality is attributed to natural causes such as cold stress, gastrointestinal disease, pneumonia, and other diseases, while the rest is human-induced, mostly attributed to collisions with watercraft. If not killed, manatees often suffer serious injuries from these events.

Manatees reach sexual maturity at about five years of age. They have low reproductive rates, producing only one calf every two to five years, and long gestation periods, approaching a year for each pregnancy. Mothers nurse their young for one to two years. 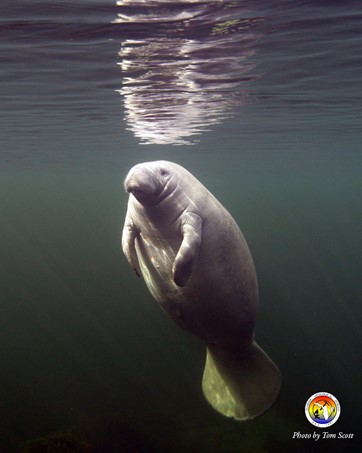