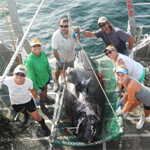 Researchers from the FSU Coastal and Marine Lab and the University of North Florida returned to port on August 5th after completing the maiden extended day voyage aboard the Research Vessel Apalachee. The purpose of the trip was to study deep sea fish communities of the northern Gulf of Mexcio and examine these organisms for exposure to and metabolism of toxins that may be related to the Deepwater Horizon oil blowout. This work is conducted as part of the FSU-led Deep-C research consortium (deep-c.org) funded by the Gulf of Mexico Research Initiative. The scientific crew included FSU Research Professors Dr. Dean Grubbs and Dr. Chip Cotton, FSU graduate student Johanna Imhoff, University of North Florida graduate students Arianne Leary and Amanda Brown, and volunteer Allison Ferreira. The R/V Apalachee was piloted by Captain Rosanne Weglinski and Assistant Captain Hugh Williams.

During the 7-day voyage, the R/V Apalachee logged more than 2,800 KM (~1,750 miles) and researchers sampled fishes captured in traps and on hooks set at depths ranging from 70 to 1,749 meters deep. A multitude of samples were collected from the more than 450 fishes that were caught. These samples are used in a variety of studies of taxonomic relationships, reproductive systems, life history patterns, food webs and diets, mercury accumulation and toxicology. The researchers captured 31 species of bony fishes ranging in size from 10 cm snailfish to giant snake eels >200 cm in length , 13 species of sharks ranging from small 25 cm catsharks to tiger sharks nearly 400 cm long. They even caught two species of slimy hagfishes.

This was the 6th cruise that chief scientist Dr. Dean Grubbs has led to sample these stations since 2011. Though the team has captured more than more than 100 species of fishes, they encounter new ones during each cruise. Some may even be new to science. During this recent expedition, the most interesting animal to be pulled up was the first recorded capture of a Greenland shark (Somniosus microcephalus) in the Gulf of Mexico. The Greenland shark is a member of the Famlily Somniosidae, the sleeper sharks, and one of the largest of all predatory shark species reaching over 5 meters in length. The specimen captured by FSU researchers measured 3.67 m (12 feet) in length and was a juvenile! The shark was captured at a depth of 1,749 meters (nearly 6,000 feet) only 25 km (~15 miles) from the site of the Deepwater Horizon blowout (the Macondo well head). Though generally considered a polar species, the Greenland shark is likely wide-ranging, moving to deeper colder waters in temperate regions. The water temperature where the Gulf of Mexico specimen was captured was 4.12°C, comparable to temperatures where Greenland sharks occur in shallow waters in Canada.

While this is the first documented capture of a Greenland shark in the Gulf of Mexico, prior video evidence suggested their presence. In 2001, a remotely operated vehicle (ROV) inspecting oil and gas prospecting structures ecorded a large shark believed to be a Greenland shark at a depth of 2,657 meters in Alaminos Canyon off the Texas coast. FSU researchers conducted detailed morphometrics to aid in developing mophological keys to separate the three global species of giant sleeper sharks. In addition, they are providing genetics samples to colleagues at the University of Windsor in Canada, who are studying global population structure of Greenland sharks, for genetic verification. The researchers collected samples of bile from the gall bladder, liver and blood for toxicological analyses to be conducted at the University of North Florida to examine potential exposure to and metabolism of toxins associated with the oil spill. Muscle samples will be used to place the specimen in a food web model using stable isotopes and also to examine mercury concentrations in the tissues. 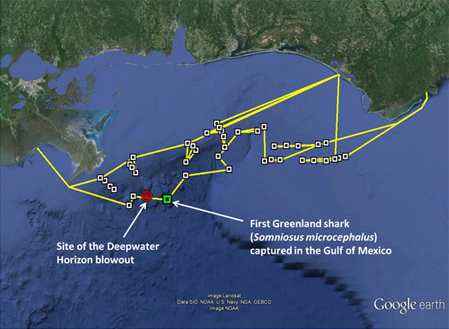