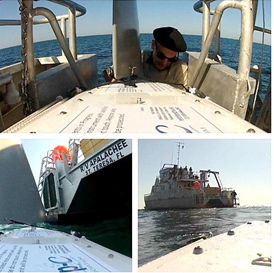 Dr. Nico Wienders, a research faculty member in the Florida State University Department of Earth Ocean and Atmospheric Science, led an expedition onboard the R/V APALACHEE to launch a sailbuoy that will traverse the Gulf of Mexico over the next two months, gathering data that will help us understand how the oil moved from the Macondo well to the shorelines of states bordering the northeastern Gulf of Mexico, from Louisiana to Florida. The buoy, developed in Norway and being tested for the first time here, will measure aspects of cross-shelf transport and upwelling events that occur near the head of the De Soto Canyon, a feature that looks all the world like a huge gash in the continental shelf. As it moves, the sailbuoy records and transmits real-time data on temperature, salinity, and oxygen fields to a satellite on an hourly basis. A typical drifter deployed around the De Soto Canyon would move out of the area within a few days. With this sailbuoy, Dr. Wienders can obtain sustained observations for two months or longer from the same location. 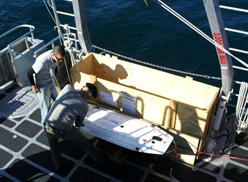 Another objective of the project is to describe the distribution of the Mississippi river plume, tracking the enormous quantity of freshwater leaving the river mouth. One of our Deep-C colleagues at the University of Miami is developing a model to forecast the location of the plume. Measurements obtained by the sailbuoy will tremendously improve the accuracy of the model by sampling within the plume for about a month. Why is this important? Because the plume is one of the primary factors, along with the wind and the Loop Current, that influences the distribution of the oil and other surface particles. It is thus crucial to have a clear understanding and representation of the Mississippi plume-De Soto Canyon interactions. 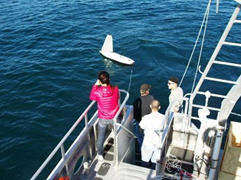 At the moment, the buoy is only equipped with three sensors for salinity, temperature, and oxygen. "So I see this sailbuoy voyage as a first test or draft," said Dr. Wienders. "If successful, I would like to reproduce the experiment later adding many more sensors, including those for chlorophyll, blue green algae, waves, pH, nitrates, and echo sounding, among others. This would not only extend the value of the monitoring, but provide a way to establish strong collaborations among biologists, chemists, and physicists within the Deep-C Consortium, all looking at the sailbuoy datasets with different eyes, producing a global story together."

In the case of a new spill, Dr. Wienders sees the sailbuoy as perhaps one of the best operational instruments for monitoring the evolution of the surface spill, in conjunction with satellite observations. If one revisits the story line of the Deepwater Horizon oil spill, one easily can see how useful it would have been to have had such an instrument deployed immediately after the event.

You can follow the sailbuoy's progress here. Also, be sure to check out Deep-C's blog on the sailbuoy project.