Construction History of the R/V APALACHEE

Vessel construction reports from Geo Shipyard, Inc (New Iberia, LA) appear in chronological order here, with the most recent report at the top of the page.

The R/V APALACHEE is completed and ready for use. On Friday evening, January 25, 2013, at 5 PM EST she rounded Dog Island and sailed into the channel here at the FSUCML lab. Staff members and scientists waited anxiously for her to dock and jumped onboard to have a look around. This vessel exceeded our expectations, thanks to the dedication of ship builders Geo Shipyard, Inc. A special thanks, as well, to Fyffe Yachts who designed this spectacular vessel and to Dejong and Lebet Marine Architect who provided shipyard construction oversight and plan review from conception through delivery. She comes fully equipped with galley, bunkroom, wet lab, dry lab, heads (one inside the ship and one with showers), dive platform, A-frame, knuckleboom, and much more.

Find out more about rates, availability, and reserving the R/V APALACHEE. 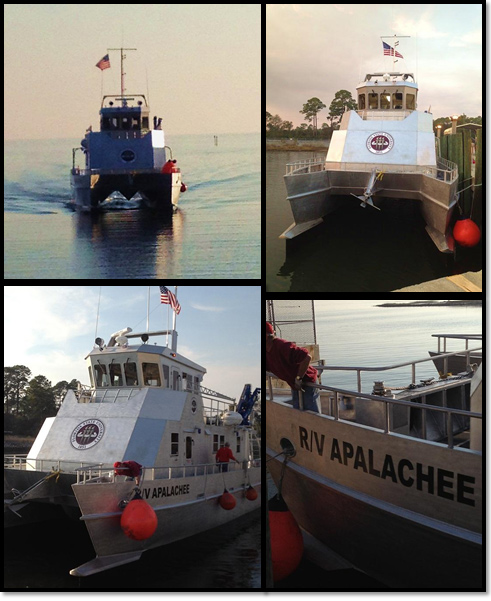 The moment we have been anxiously awaiting for is so close! We are anticipating arrival of the new research vessel, temporarily named R/V Apalachee, in about a week! The name is temporary because it is required to have one before it can leave the shipyard, but we are still offering a naming opportunity. Some of the more recent updates include a fresh coat of paint along with our FSU seal on the outside, dive platforms installed and fully functional, closet storage and bunk beds installed in the bedrooms, counters and seats installed in the galley kitchen area, and showers and sinks installed in the bathrooms. Take a look at the pictures below. In the first row are images of the completed boat in the water at the shipyard in New Iberia, LA (L), one of the dive platforms off the stern of the boat (M), and a storage closet in one of the bedrooms (R). The second row contains pictures of the bunk beds (L) and the galley kitchen (R). The third row displays pictures of the galley dining area (L), the bathroom sink at the head of the boat (M), and the shower at the head of the boat (R). 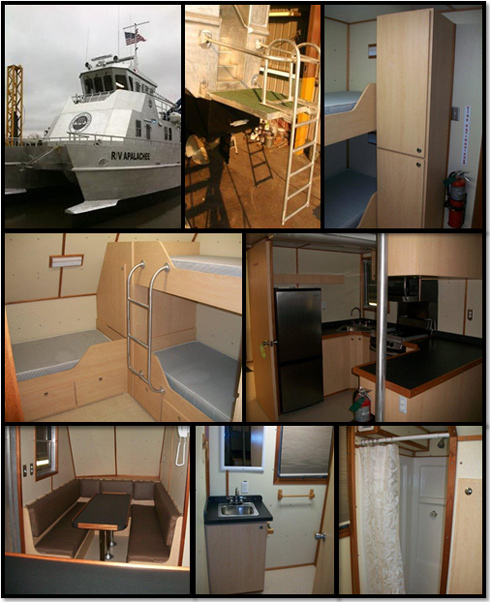 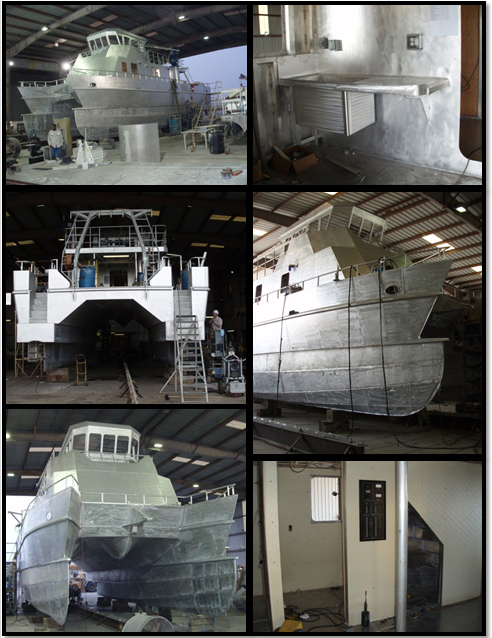 A recent visit to the Geo Shipyard, Inc (New Iberia, LA) confirms great progress on the new research vessel. The deck infrastructure is really taking shape! The interior spaces are becoming defined as we now have a pilot house, galley, bunk room, full head with shower, dry lab, wet lab, and an aft head with shower. The insulation is currently being installed. The boat's stern (see lower right picture) will soon have dive platforms extending from the base of each stairwell. These platforms will be able to fold up against the transom when not in use. Later, an articulating A-Frame will be mounted on the deck between the two stairwells. 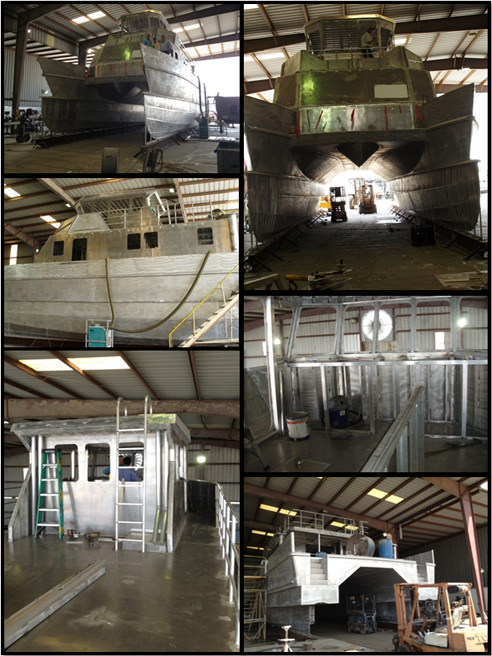 Here are photos showing the starboard engine going into the ship 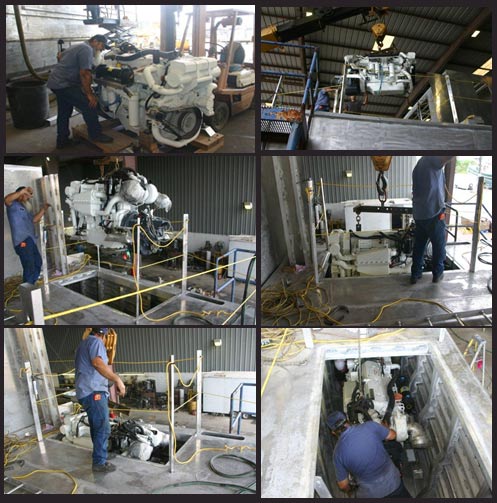 We have received our third report from the marine surveyor, this one indicating that the hull structure and shell plate of the vessel are complete. The port and starboard shafts and rudders are installed, the bearing fitted and bolted. The hydraulic cylinder supports and stops have been fitted and welded; the hydraulic cylinders are installed. Port and starboard fuel tanks are now in the hull. Stair plates from the transom to the deck are in place. Construction of the deckhouse is well underway. 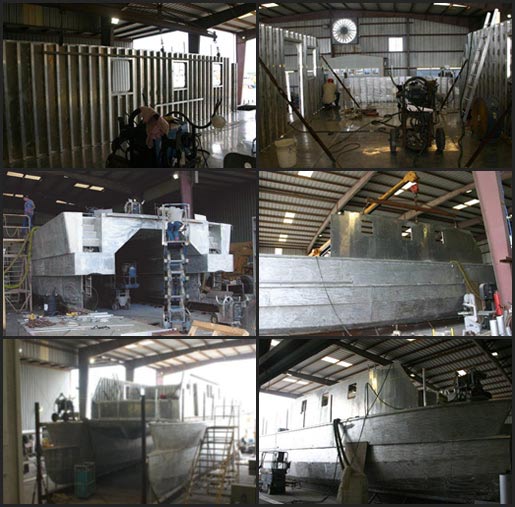 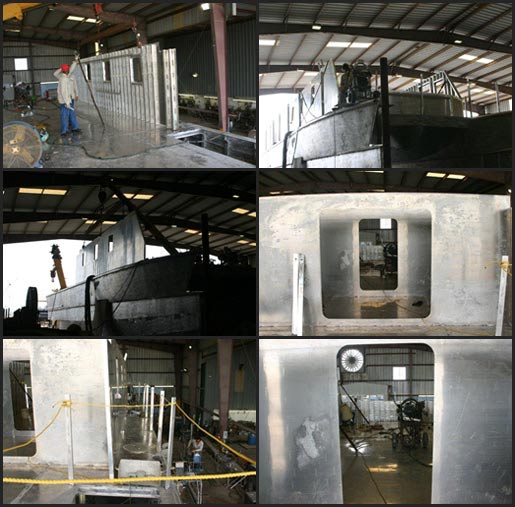 The marine surveyor completed his second report, indicating that the two 13.5-L John Deere engines and two 30-KW Northern Light generators arrived at Geo Shipyard, Inc. (New Iberia, LA) in good condition, ready for installation. Progress is being made on the skinning of the vessel; note the skilled craftsmanship in the fitting and welding of each piece. The deck-house superstructure has been fabricated and ready for assembly, stern tubes are in place awaiting installation of the running gear. 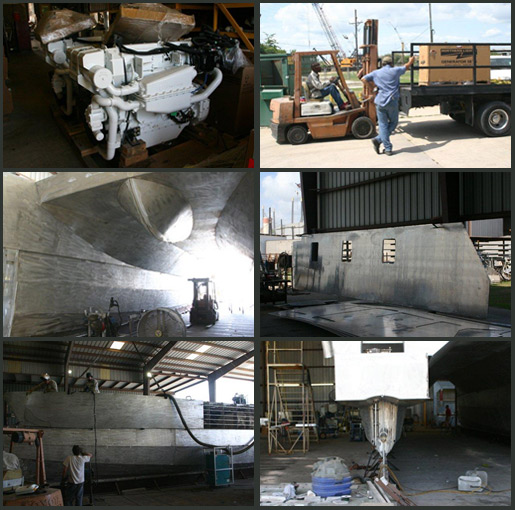 Captain Rosanne Weglinski, Dr. Felicia Coleman, and Mr. Andy Lebet (marine architect) visited the FSUCML research vessel at Geo Shipyard, Inc (New Iberia, LA) on May 8 to review progress with shipyard owner, Mr. David LeCompte. The ultrasonic investigation of the aluminum hull construction had been completed the previous month, revealing sound construction, and while we were on site, the skinning of the hull began. It will not be long before you'll see the vessel emerge. 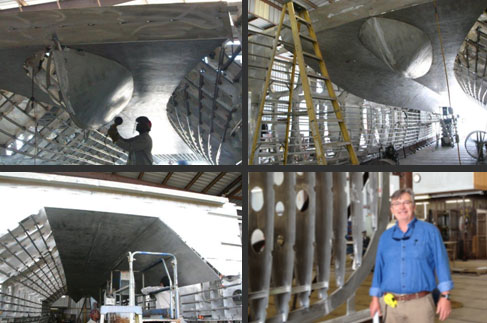 The foundation of FSU's research vessel evolves with systematic layers of framework. These frames act as stiffeners holding the outside plating in shape while maintaining the transverse form of the ship. This process gives the ship its structural integrity. The "skin" is now going on the bottom and sides of the vessel. Marine architect Andy Lebet.

Captain Rosanne Weglinski visited the FSUCML research vessel at Geo Shipyard, Inc, (New Iberia, LA) on March 20, when she also delivered the winch from the old RV Seminole for reconditioning. The marine surveyor was on-site at the shipyard conducting an ultrasonic investigation of the aluminum hull construction. Geo Shipyard owner David LeCompte followed up with some new photos (April 10) detailed below. By the time we make our next visit to the shipyard in May, the hull will be skinned and then you'll see the vessel emerge. 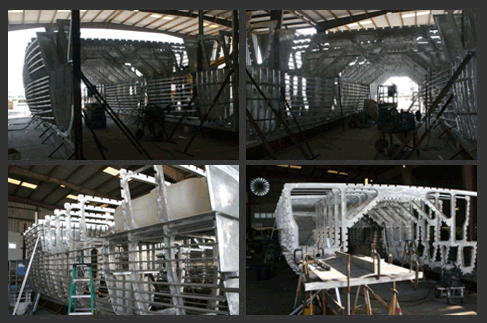 The foundation of FSU's research vessel evolves with systematic layers of framework. These frames act as stiffeners holding the outside plating in shape while maintaining the transverse form of the ship. This process gives the ship its structural integrity.

Looks like it might be time for our first road trip to Geo Shipyard, Inc. (New Iberia, LA) with the boat captain and Andy Lebet, of Dejong and Lebet Marine Architects. The first marine surveyor report indicates that the vessel passes muster for being built according to good marine practice. 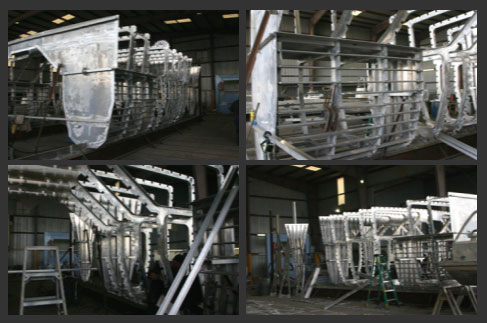 The folks at Geo Shipyard, Inc. (New Iberia, LA) just sent the second set of pictures showing the new FSUCML vessel's keel up on the jig with the bulkheads going up. They expect the marine surveyor to be on hand this week to document the progress. 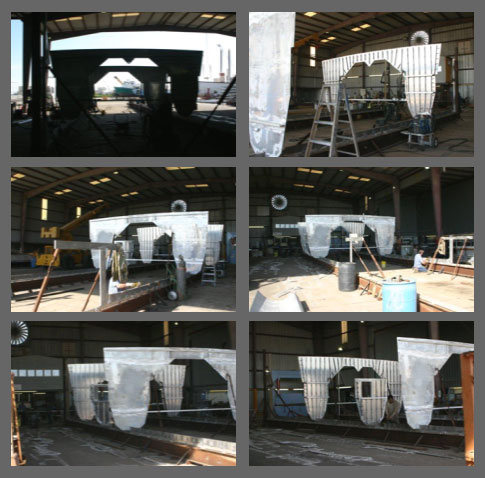 The FSUCML is pleased to announce that Geo Shipyard, Inc. (New Iberia, LA) won the bid to build our new 63-ft aluminum-hulled catamaran research vessel. Marine architects Dejong and Lebet, Inc.(Jacksonville, FL) developed the preliminary plans with input on vessel design and specifications from faculty at the marine lab, the departments of Earth Ocean and Atmospheric Science and Biological Science, the Center for Ocean-Atmosphere Prediction, the University-National Oceanographic Laboratory System (UNOLS), and the National Marine Fisheries Service. The outcome was a boat with a shallow draft, high maneuverability (twin-screw diesel engines), and a cruising speed of 20 knots. It will have both wet and dry laboratories, a full galley, and the capacity to sleep seven people for up to seven days offshore. The vessel will provide a wonderful addition to the FSUCML fleet, as well as a welcome addition to the fleet of seagoing platforms servicing researchers working throughout the northeastern Gulf of Mexico.

Laying the keel started this past week, the first step in vessel construction. The aluminum pieces you see in the photos to the left were cut with a jig and will be welded together at the Geo Shipyard to form the keel. Stay tuned for photo updates as the process moves along. 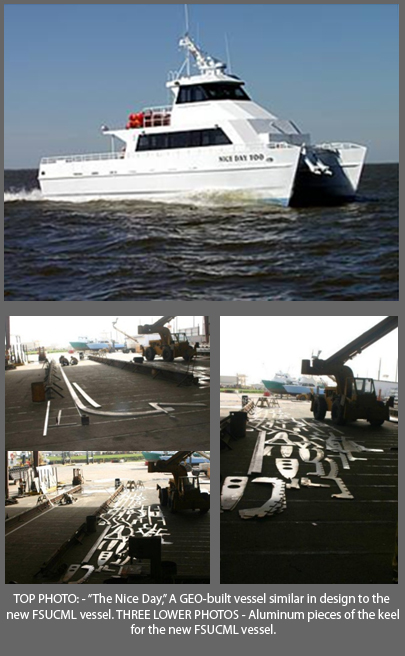 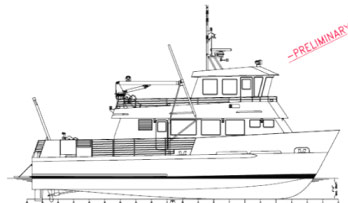 Last fall, Dr. Kirby Kemper, FSU Vice President for Research, provided $1.6 million for the design and construction of a new research vessel at the FSUCML. Dejong and Lebet (Jacksonville, FL), marine architects, completed the preliminary design and specifications in June 2011, and Geo Shipyards, Inc. (New Iberia, LA) received the contract. The 64-ft vessel (21-ft beam) aluminum catamaran hull vessel will have twin-screw diesel engines, the ability to cruise at 20 knots, and capability of staying out for seven days, and sleep seven. The design is custom-tailored for research in the coastal and offshore waters of the Gulf of Mexico, and has more space and greater stability than our previous research vessel (which we recently retired). The work deck's modular design will be particularly useful, allowing easy adaption of the vessel to suit the specific needs of individual research projects.