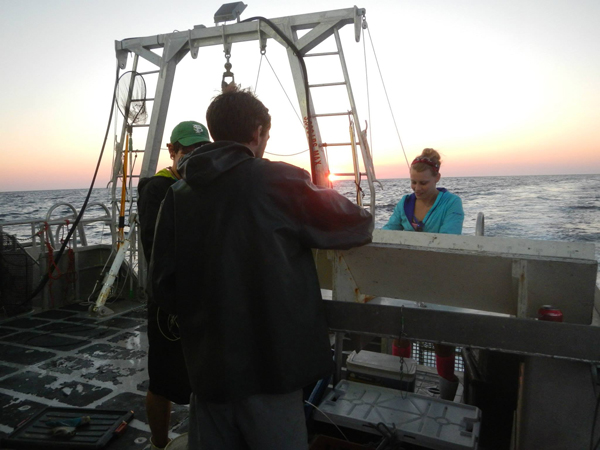 The R/V APALACHEE has been extremely busy. Since May, our flagship has completed over 90 days at sea and provided a platform for conducting research for the Florid State University Coastal and Marine Laboratory, The Deep-C Consortium, The Florida Fish and Wildlife Commission, and the National Oceanographic and Atmospheric Administration. Recent trips include four missions for FWC, four missions for NOAA, and three missions for Deep-C. These missions ran from four to eleven days each.

The FWC and NOAA researchers conduct offshore monitoring of reef fish in the Gulf. They use camera systems and chevron traps to observe collect reef fish in waters from 10 - 110 meters. "The R/V APALACHEE worked well for our sampling requirements," Sean Keenan, Marine Research Associate for the FWC said. "The vessel is well equipped to deploy/retrieve our sampling gear and captains were willing to conduct 24-hour operations to improve our overall sampling efficiency. The vessel and FSU staff were willing to go the extra mile to accomplish our cruise objectives." 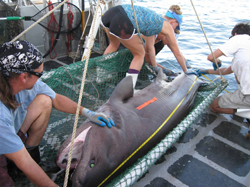 FSUCML faculty Dr. Dean Grubbs and graduate students from Florida State University, University of North Florida, and University of West Florida, recently returned from a 10-day cruise aboard the R/V APALACHEE conducting research to investigate the effects of the Deepwater Horizon oil spill on deep sea fishes as part of the Deep-C Consortium. This was the 10th overall cruise for this research project and 5th aboard the R/V A. During the cruise, the team fished 38 stations at depths from 173 to 1860 meters, setting bottom longlines with two fish traps attached. The crew captured 343 fishes from 35 different species: 15 species of elasmobranchs (sharks, skates), 17 species of bony fishes, and 3 species of hagfish. Approximately 3000 samples were collected for studies of oil and mercury contamination, life histories (age, growth, reproduction), phylogenetics (relationships among groups of organisms) taxonomy (classifications), diet, and food webs. Most of these samples support several ongoing graduate student research projects. 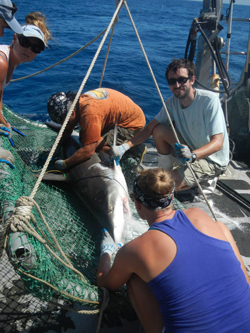 The R/V has proven to be a workhorse for carrying out a wide array of scientific research, from dropping and retrieving underwater cameras and fish traps in shallow water to pulling large sharks from thousands of feet of seawater, the Apalachee has proven herself time and time again.

While it has been a successful summer cruising season, Marine Operations is already looking towards the future to see how the The R/V APALACHEE can become even more productive on its future missions. The lab is exploring the possibility of installing a state-of-the-art weather station aboard the vessel. Data provided by this weather station could eventually become available to mariners in the northeastern Gulf of Mexico, an area that traditionally has limited access to such data. The lab is also looking into the possibility of acquiring a new winch and a CTD, an oceanographic instrument used to determine the conductivity, temperature, and depth of the ocean. These instruments will not only improve scientific interest in using the R/V APALACHEE, but the data they generate will significantly assist scientists in conducting future research aboard the vessel.