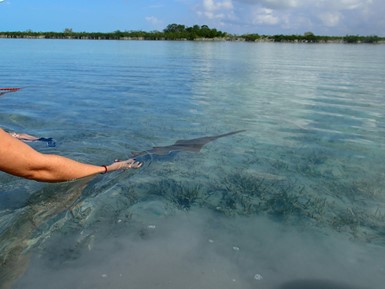 Andros, Bahamas. Sawfish are creatures of myth and legend, enormous shark-like rays with a huge rostrum bearing a row of formidable teeth protruding from each side. There are five species of sawfish in the world and all are considered Endangered or Critically Endangered in the IUCN Red List of Threatened Species. Dr. Dean Grubbs (Associate Director of Research, Florida State University Coastal & Marine Laboratory) and his colleagues have been studying the critically endangered smalltooth sawfish in Florida and the Bahamas since 2010, conducting research to aid sawfish conservation efforts. Much of their work has been directed towards using surveys, satellite tagging, and tracking to determine where adult sawfish mate, where the females give birth, where important nurseries are, and to determine where sawfish are most likely to be vulnerable to captures as bycatch in different fisheries. During a recent expedition funded by the Save Our Seas Foundation to the remote island of Andros his team made a discovery that will have major implications for recovery of this charismatic species. To set the stage, in 2003, smalltooth sawfish became the first native marine fish species listed as Endangered under the U.S. Endangered Species Act. Mangrove lined estuaries from Charlotte Harbor, Florida to Florida Bay in Everglades National Park have been designated as Critical Habitat for the species because these are the only areas where females were known to give birth and are thus critical to recovery of the species. Though sawfish were known to occur in the Bahamas, it was unknown whether these sawfish were born in the Bahamas or perhaps were part of the Florida population. 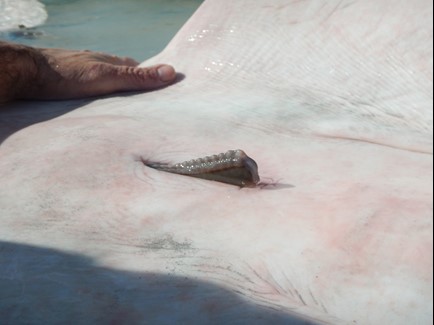 On December 7, 2016 Dr. Grubbs’ team, including Dr. Andrea Kroetz (NOAA) and FSUCML graduate research assistants, Bianca Prohaska and Bryan Keller, captured a female sawfish on the west side of Andros, Bahamas that was just over 14-feet in length. During the process of tagging the large sawfish to monitor her movements, the team noticed there were the rostra of two baby sawfish protruding from her vent; she was giving birth. The research team, with the assistance of Field School staff Jake Jerome and Nick Perni, assisted the mother sawfish in the birth of five pups (i.e. baby sawfish) before releasing her to birth the rest on her own (it is believed sawfish give birth to 10-12 pups). This is the first time a live sawfish birth has been documented in the wild. The rostrum of a newborn sawfish emerges from the mother covered in a thick sheath of tissue covering the needle sharp teeth, thus protecting the mother. Dr. Grubbs’ team took genetic samples on both the mother and the five pups, implanted an acoustic transmitter in the mother and attached a satellite tag to her dorsal fin for tracking her movements, and inserted P.I.T. tags on the pups (a process similar to micro-chipping pets and lasts their lifespan). Afterward, the mother and the five pups were set free in the wild. 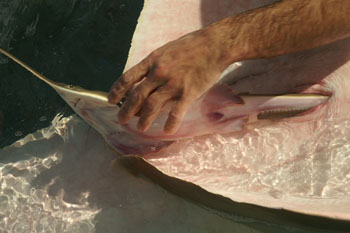 Not much is known about sawfish reproduction, and while the birth was typical of many sharks and rays, this confirmed “pupping” of sawfish in Andros, Bahamas. Dr. Dean Grubbs has been studying sharks and rays for more than 25 years and describes the recent experience as “the biggest day of my research career.” This indicates there are now two known pupping and nursery areas (southwest Florida and west Andros), increasing the potential for recovery of this endangered species. Importantly, just as much of the critical sawfish habitat in Florida is protected in wildlife refuges and national parks, the area of Andros that the team has shown to be important habitat for adult and juvenile sawfish is within the recently formed West Side National Park. Protecting such areas is critical to recovery of the species. 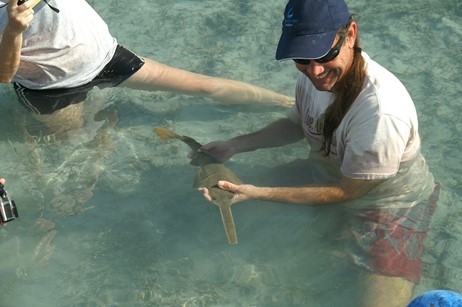 Sponsored by a Keystone Grant from the Save Our Seas Foundation and supported by The Field School and the Flamingo Cay Rod and Gun Club, the purpose of the research is to discover if there is any evidence of exchange between the sawfish population in the U.S. and Bahamas. Currently, sawfish populations are believed to be regionally resident, meaning they do not migrate far from their original habitat. Dr. Grubbs and Dr. Kroetz will be going back in March 2017 to continue their research.

To see footage of the expedition and live sawfish birth, check out this video produced by the Field School. 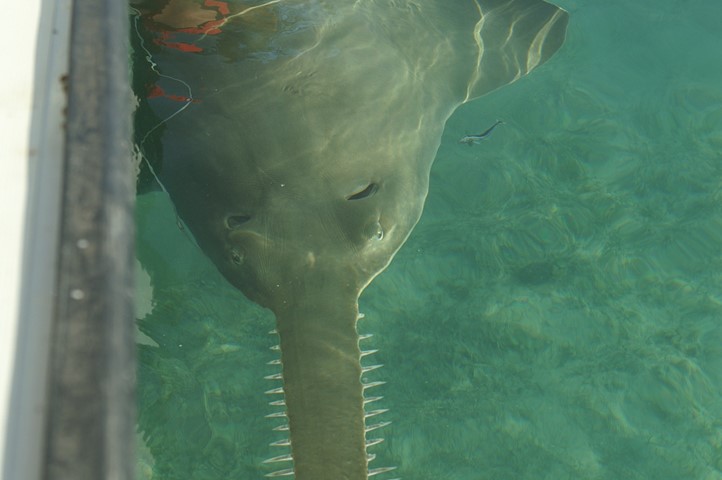 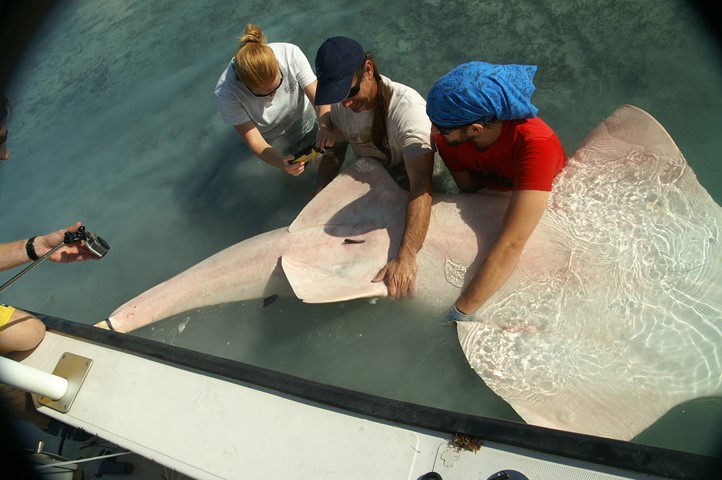 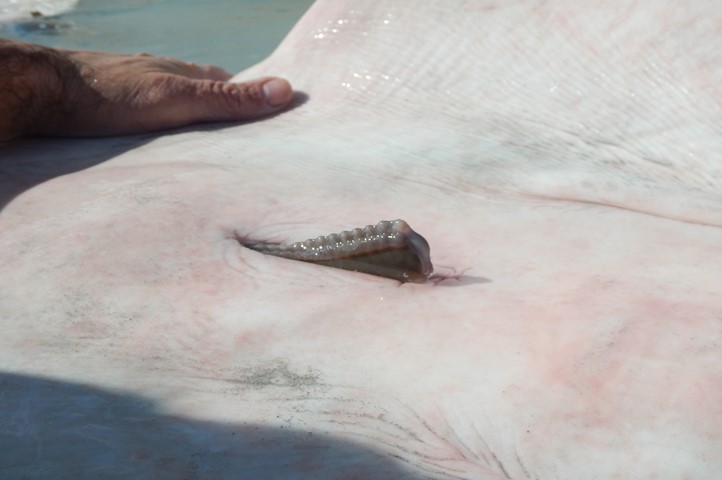 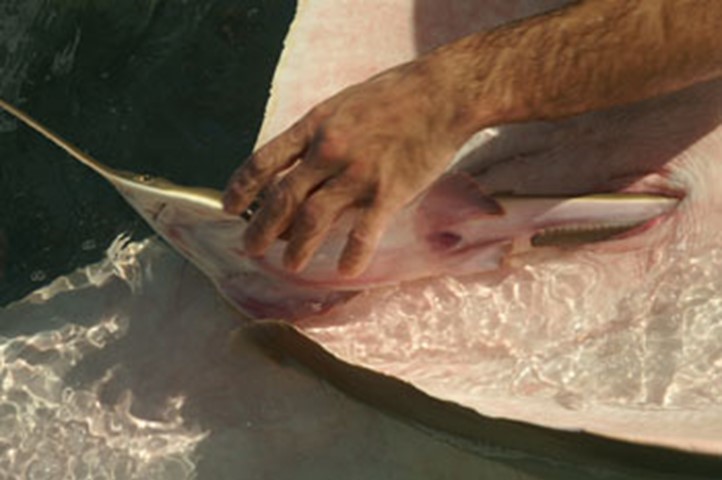 Dr. Grubbs assists sawfish give birth to two pups--documented for the first time 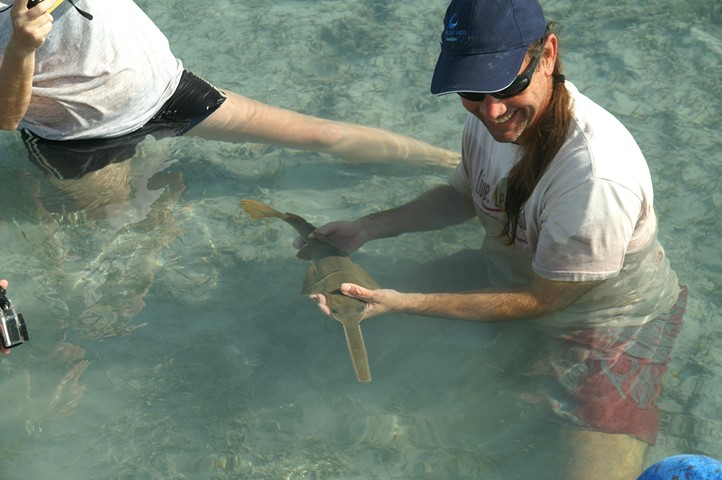 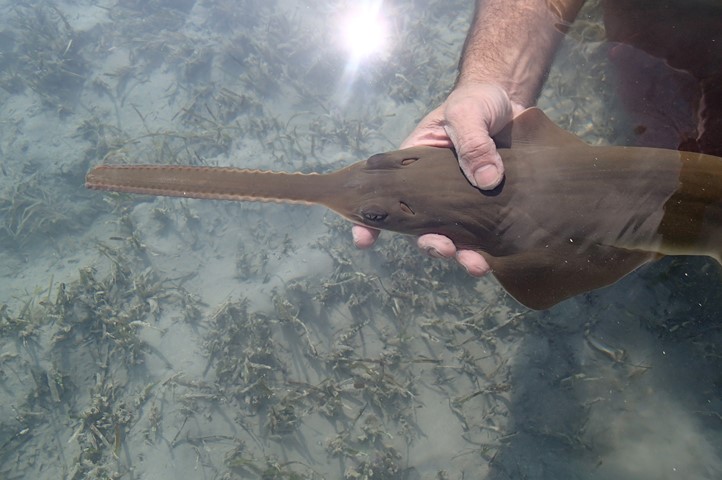 Sawfish pup just after its birth 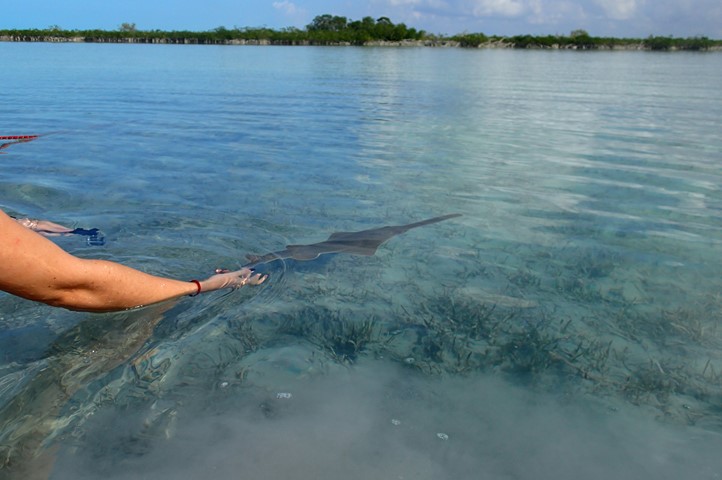 Newborn sawfish pup is set free in the wild 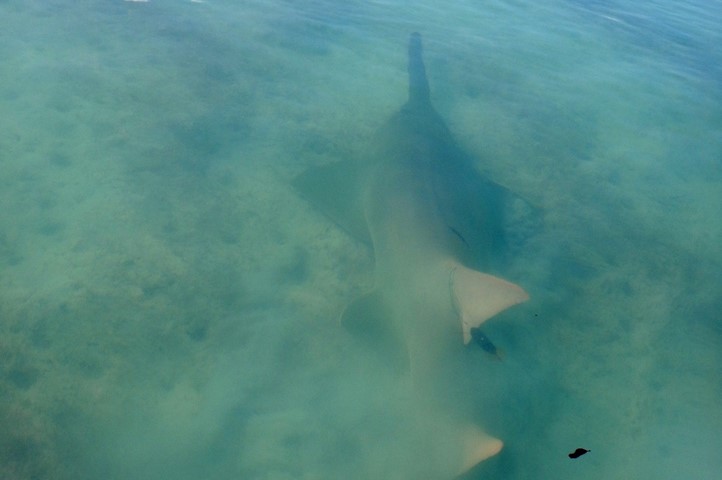