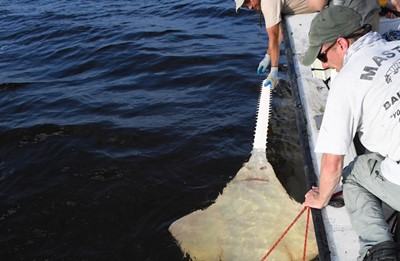 Tallahassee, Florida. April 13, 2017. For the first time in 17 years of Florida-based research, scientists have discovered a mating ground for the Endangered smalltooth sawfish. During an expedition early April to the shallow-water back-country of Everglades National Park, a research team captured, tagged, and released three adult sawfish (one male and two females) in an area previously known almost exclusively as juvenile sawfish habitat. All three had distinctive lacerations, apparently sustained during mating, that match the pattern of teeth on the animals’ saw-like snouts. The team includes scientists from Florida State University (FSU) and the National Atmospheric and Oceanic Administration (NOAA) who conduct ongoing research permitted under the Endangered Species Act (ESA) to monitor sawfish population health.

"We’ve long assumed sawfish mating was a rough and tumble business, but we had never before seen fresh injuries consistent with recent mating, or any evidence that it was happening in areas we’ve been studying primarily as sawfish pupping grounds," said Dr. Dean Grubbs, Associate Director of Research for FSU’s Coastal and Marine Laboratory. "Figuring out where and when sawfish mate, and whether they do so in pairs or aggregations, is central to understanding their life history and ecology."

Scientists backed up their observations with ultrasound and hormone analyses that indicated the females were preparing for pregnancy. Florida researchers have caught adult male and female sawfish together on only a few occasions, and in a few locations.

"We are all very excited by this monumental development in our efforts to uncover the mysterious mating habits of sawfish," said Tonya Wiley, Owner and President of Haven Worth Consulting with 16 years of experience studying sawfish. "While much of Southwest Florida has been designated as ‘critical habitat’ for smalltooth sawfish, this discovery underscores the exceptional importance of Everglades National Park to the conservation and recovery of the species."

The smalltooth sawfish (Pristis pectinata) was listed as Endangered under the ESA in 2003. Under the leadership of NOAA, the listing prompted strong federal protection for the species, safeguards for critical habitat, a comprehensive recovery plan, and carefully controlled research.

"Florida’s sawfish have a long road to recovery, but exciting breakthroughs so far provide lessons and hope for other endangered populations around the world," said Sonja Fordham, President of Shark Advocates International, a project of The Ocean Foundation. "The new findings can help efforts to protect sawfish at critical times, but also highlight the need to protect the park system that ensures suitable habitat, the funding for research, and the overarching law that has made success to date possible."

In late 2016, Dr. Grubbs reported the first observation of sawfish birth (recorded in the Bahamas)