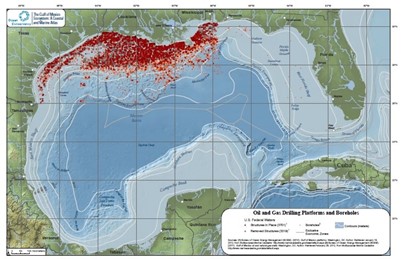 The Florida State University Coastal and Marine Laboratory, on the Gulf of Mexico (GoM) coast in north Florida, is a beautiful place. It is not uncommon there to see ospreys and bald eagles eyeing the coastline, pelican formations flying low, dolphins churning the water in a feeding frenzy or sharks cruising the shallows seeking out their next meal. It is also a place where a clear view of the horizon when standing on the beach is the rule, rather than the exception. Unfortunately, this is not the case everywhere in the GoM, with 1000s of miles of pipelines and 100s of oil and gas platforms to the west of Florida. The image that illustrates this like no other was shown during Tracy Sutton’s plenary talk at the Deep-Sea Biology Symposium in Monterey last September (Fig.1). A map that shows the stark contrast between the unexplored nature of Florida’s Gulf waters, and the waters to the west, taken over by energy production. The contrast is the result of Florida’s federal exemption for oil and gas exploitation, and in Florida’s state waters there is an oil drilling ban which has recently been voted into the state’s constitution. Whether or not the federal exemption will last into the longer-term future is unsure, but in the meantime it does mean that the waters are unaffected by oil and gas drilling and are underexplored, with relatively little research effort in the region. 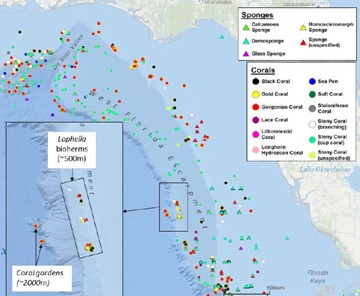 Most deep-sea research in the deep GoM has focused on the northern region, particularly areas that are important for the energy industry. These efforts, funded primarily by the Bureau of Ocean Energy (BOEM), have contributed to the discovery of extensive chemosynthetic and deep-sea coral (DSC) communities in the northern GoM, and have advanced our understanding of sediment infaunal communities. The eastern GoM however, remains relatively unexplored; the moratorium on oil and gas extraction has precluded this area from BOEM funding, and the deep west Florida slope is a remote and challenging place to work. In recent years, NOAAs Office of Ocean Exploration and the NOAA Deep Sea Coral Research and Technology Program have conducted a number of mapping and surveying cruises on the West Florida Slope. Multibeam bathymetry revealed a topographically complex area with scarps, mounds and ridges that are conducive to development of DSC ecosystems. Remotely operated vehicle (ROV) surveys confirmed the presence of abundant and diverse deep coral communities, including several large Lophelia pertusa reefs at depths of ~500m, and diverse assemblages of octocorals and black corals along the scarps and ridges of this topographically complex region (Fig. 2).

Under the lead of Dr. Sandra Brooke, a team of Florida State University (Brooke, Jeroen Ingels, Amy Baco-Taylor) and Florida Agricultural and Mechanical University (Steven Morey) scientists were awarded a grant under the NOAA Ocean Exploration call, to investigate deep-water ecosystems in the Gulf of Mexico.

The one-year project will focus on the deep (>1,000m) habitats and associated communities of the West Florida Slope. Bathymetric maps, habitat suitability models and  a high-resolution oceanographic model will be used to select target study sites,  and the oceanographic model will be validated using meiofaunal communities in a novel approach. New information on deep coral habitats and associated communities will be generated using digital imagery, and species assemblages will be identified using morphological taxonomy and genetic techniques. An ROV and benthic sampling cruise has been planned to take place in autumn 2019.

Collaboration with NOAA will ensure the new data and the high resolution oceanographic model is incorporated to refine the coral predictive habitat models for deeper portions of the Gulf of Mexico.

Deep ocean discoveries appeal to the public sense of exploration and help to create excitement for ecosystems that are inaccessible to the vast majority of people, but are vulnerable to human activities. This project has great scope for such discoveries and outreach opportunities. Information generated by this work will be disseminated to the scientific community, resource managers and the general public, to stimulate future research and conservation efforts.