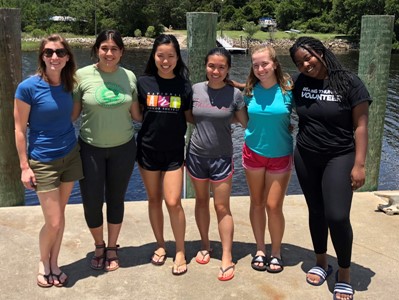 Under the advisement of Dr. Sophie McCoy and laboratory technician Penelope Ales, four high school students from various parts of Florida enrolled in the FSU Young Scholars Program have been exploring the effects of climatic stressors such as fluctuating nutrient levels, low salinity, and water browning on the metabolic functions of Thalassia testudinum, or turtlegrass. They also have been studying whether temperature alone or in conjunction with any of these treatments have any kind of effect on metabolic processes. Racquelle Moxey and Tran Le have been studying the effects of low salinity regimes associated with rainstorms and freshwater outputs in estuarine ecosystems on the photosynthetic and respiration rates of turtlegrass, in addition to how this may affect carbon acquisition mechanisms. Caitlin Chen has been studying the effects of additional nutrients associated with eutrophication in aquatic ecosystems on the photosynthetic rates and carbon acquisition strategies of turtlegrass. Mary Brady has been studying the effects of water browning/turbidity associated with stirring of the sediment or rainfall events on the hotosynthetic yield and photosynthetic rates of turtlegrass. 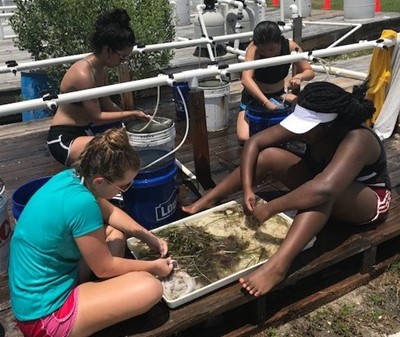 Treatments that each student wanted to study the effects of were added multiple times a week into tanks that flowed out onto the outdoor deck of FSUCML into different colored buckets that were used to simulate a warmer temperature associated with projected climate change estimates and a present day temperature. The students maintained seagrass samples during the program by cleaning them of visible epiphytic diatom growth or single celled algae that try to colonize the buckets quickly! Every week, an oxygen logger was used to measure respiration and photosynthetic rates of the Thalassia testudinum in response to each of these treatments and a PAM flurometer was used to measure the photosynthetic yield over time. Using inhibitors to block certain pathways used by seagrasses and other macro-algae to acquire carbon used during photosynthesis, they also were able to quantify relative use of different pathways.

As we head into the end of the six week program, the students are preparing for a poster session in which they present their results to peers and have gained an appreciation for seagrasses! Seagrass habitats serve as nurseries for many juvenile fish and as food for species including manatees and sea turtles. They also contribute to primary productivity in oceans and may be an important species to consider in the mitigation of climate change effects.

The Young Scholars Program (YSP) is a six-week residential science and mathematics summer program for Florida high school students with significant potential for careers in the fields of science, technology, engineering, and mathematics.