Madison Fish, a 15-year-old International Baccalaureate student at Rutherford High School in Panama City, Florida, has spent a significant amount of time dealing with slime. Hagfish slime that is.

Hagfish use slime as a defense mechanism against predators, releasing enormous quantities to ward off attacks. The “slime” contains protein-based fibers that resemble spider silk in their strength and durability, so you can imagine the effect on the gills of a hapless predator. The fibers’ remarkable strength also makes them excellent candidates for biomedical use. One use that comes to mind is as a substitute for suture materials that cause allergic reactions in patients. Further, if the protein structure of the fibers could be determined, it would facilitate synthesis of the fibers, increase the opportunity for developing other commercial applications, and release hagfish from the potential threat of overharvesting1. The first question, however, is where do you get hagfish slime? 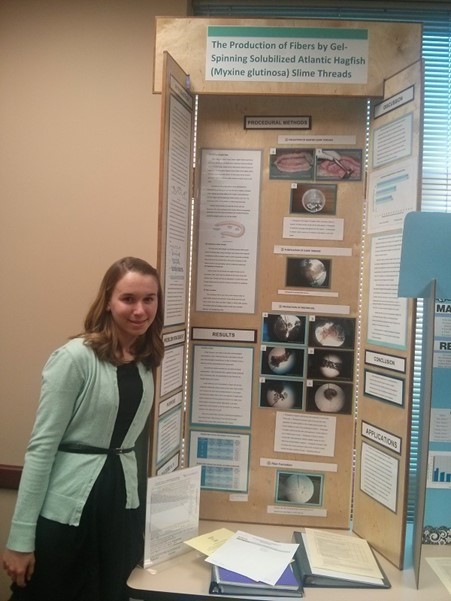 Enter FSU Coastal and Marine Laboratory scientists, Dr. Chip Cotton and Cheston Peterson. After learning of Madison’s needs, they knew they could help by providing hagfish that they collected during a Deep-C Consortium research cruise in the Gulf of Mexico onboard the R/V Apalachee.

With slime in hand, Madison attacked the primary question of her research, which was, how does one extract fibers from slime? She decided to test a “gel-spinning method” that is commonly used in the production of medical fibers and biotextiles. This method requires solubilizing, or breaking down, the fibers into a gel using formic acid (the chemical responsible for the “sting” of ant venom), and spinning the gel in a centrifuge at high speed to separate the liquid from the fibers and leaving the fibers in the form of a pellet. Once this “pellet” of isolated fibers dries, analysis of its physical and chemical properties can occur. “That”, said Madison, “was for someone else to figure out”. For Madison, being able to repeatedly extract 98% of the fibers contained in the slime was more than enough to consider her project a great success.

She is not stopping there! Madison is working on a new research project focusing on computer software aiding biomedical research. She views these research projects as opportunities to explore future career options.

Congratulations, Madison, on all your hard work and accomplishments! Your diligence and pleasant disposition made it very enjoyable to support your research at the lab. Good luck in your future endeavors! A special thank you to the Gulf of Mexico Research Initiative’s Deep-C Consortium for providing support to collect the hagfish samples.

1This brings up a number of questions about commercial use of this species. As animals that live in deep, dark, cold environments, can they survive in captivity? Can individual hagfish in captivity withstand repeated sliming? If farm-raising hagfish is not an option, Can hagfish populations survive prolonged, intense harvesting? While the answers to these questions are unknown, very crude estimates for the number of hagfish needed for commercial fiber production suggest that such harvest is unsustainable.