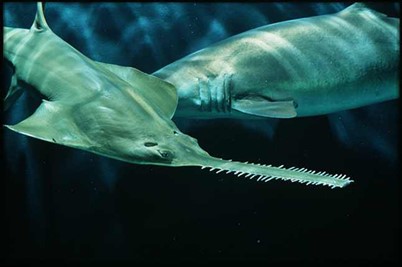 It’s that time again...time to be a CITIZEN SCIENTIST! Help the Florida Fish and Wildlife Conservation Commission by reporting sightings of the endangered sawfish.

Sawfish are known for their long saws, called rostrums, that extend out from their heads. Sawfish are batoids, like skates and stingrays, and are most closely related to guitarfishes. Some reach up to 20 feet in length, making them the largest predator in the ecosystems where they occur. Sawfishes occur worldwide in tropical and subtropical marine environments.

The smalltooth sawfish (Pristis pectinate) became the first native marine fish to be listed as Endangered under the U.S Endangered Species Act in 2003. Historically, sawfish were a common sight off Florida's coastline. However, due to habitat loss and overfishing, their populations have declined significantly.

Have you seen a sawfish lately? Report it to the FWC by email at Sawfish@MyFWC.com or by phone at 641-255-7403. Include the time, date, location, water depth, approximate length of the sawfish, and any other relevant details you have.

For more information about the sawfish, visit the FWC website.