Dr. Sandra Brooke, Florida State University Coastal & Marine Lab (FSUCML) Research Faculty, recently returned from Washington D.C. where she was invited to speak at the PEW Charitable Trust and Natural Resources Defense Council’s Deep-Sea Corals Reception. Dr. Brooke shared her latest research on the Mid-Atlantic Canyons. She spoke to guests about the distribution and abundance of corals and cold seeps in the canyons, and the role they play in supporting diverse communities of invertebrates and fishes. 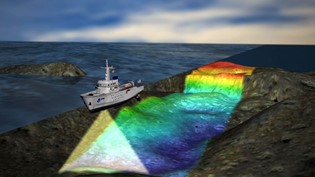 Dr. Brooke and her research team discovered a vast cold seep (~1.5 km in length) near the mouth of Norfolk Canyon, after diving in an area where the NOAA Ship Okeanos discovered bubble plumes. Cold seeps occur when methane is released from below the seafloor, either as bubbles or as a slow ‘seepage’. Some organisms, such as the seep mussel, have adapted to take advantage of the methane as a food source. Their tissues contain bacteria that use the methane to produce energy, which they then share with their host. This type of feeding is called chemosynthesis and the animals that use it are dependent on the chemicals to survive. These animals are therefore ‘endemic’ to the seep habitats. 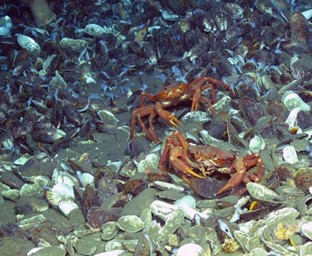 Dr. Brooke’s research has shown that the Mid-Atlantic canyons, such as Norfolk Canyon, support much more abundant and widespread communities of deep sea corals than was previously known. These include first records of two reef-building stony corals, which were discovered during the research cruises. In addition to the corals and seeps, the canyons support many species of fish and invertebrates, several of which are commercially valuable. Fishers avoid the rugged canyon areas, creating a refuge for fishes that may be overfished elsewhere.

When speaking about her research, Dr. Brooke says, “information generated by the deepwater canyons project has greatly improved our understanding of the distribution of deep-sea corals and cold seeps. Such data will be valuable for the scientific community and for management agencies charged with protecting ecologically important areas”.

We look forward to the continuation of Dr. Brooke’s research and seeing what else she discovers!