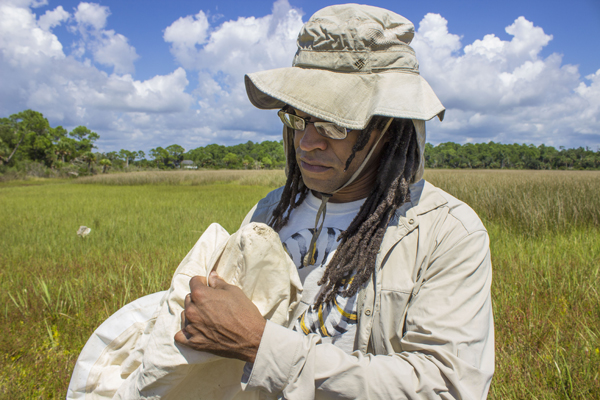 Some things are worth sacrificing for. While many might not initially agree that studying insect parasites is one of them, that is clearly not the case for Marisano James, PhD candidate at University of California, Davis. Marisano has caught and reared wasps in California, stood in salt marshes at the crack of dawn in Florida, and stayed awake all night for nights on end in Oklahoma, all to obtain the elusive insect, Strepsiptera. For him, it's all about the eyes, and here is part of why.

Strepsiptera are tiny (2-6 mm, depending on species) internal parasites that use other insects, such as wasps, planthoppers, and burrowing bugs, as hosts. The adult males have very unusual eyes. Unlike most insects, which possess “apposition” compound eyes and see a single point through each facet, male Strepsiptera have a series of simple eyes - our eyes are simple eyes - that combine to make their compound eye. Each simple eye forms its own inverted images, which must be flipped over and combined with those from the other eyes. This rather convoluted system combines aspects of simple and compound eye vision to produce an eye that collects much more light than those of other similarly-sized insects. Adult females, on the other hand, are blind, wingless, legless, and do not have antennae. A female does live much longer than her male counterpart, however, and sometimes extends the life of her host many times over. In some species, she can even manipulate the external behavior of her host!

Many entomologists have never seen a Strepsiptera, but Marisano has caught three species of twisted wing parasite: a species that’s only active during the day (diurnal), a species that is only active at night (nocturnal) and a species that is only active in the dim light of dawn (crepuscular). By looking at strepsipteran eyes from all three light regimes, Marisano intends to learn more about how well they work. But it’s that last species that’s brought him back to the Florida State University Coastal & Marine Laboratory (FSUCML). Once Marisano collects more of the crepuscular species (Elenchus koebelei), he will repeat an experiment that did not pan out last year.

To study the structure of these tiny insects’ eyes, Marisano must “fix” them before they even begin to decay (the average lifespan of an adult male Strepsiptera is only 3-4 hours). He collects the insects by standing in a salt marsh before dawn, attracting them with a UV light, and trapping them with water – interestingly, they do not drown. First, he must put the insects on ice as soon as he catches them. Then transport them to the lab, where he cuts off their minute heads, and goes through a 4-day process that even includes depleted uranium, but ends with the eyes embedded in an epoxy. That way, they can be sliced into sections thinner than the width of a human hair for study. It is this experiment that failed last year. The chemicals Marisano used had been degraded by the Florida heat and were no longer strong enough.

Marisano also studies the color receptors in Strepsiptera eyes. One of the ways he does this is by collecting electroretinograms (ERGs), which are graphical representations of the electrical responses of the eye to light. An ERG machine connects to both the eye of the Strepsiptera and a part on its body. By flashing different known wavelengths of light, the ERG machine measures and records the responses that a Strepsiptera’s eye has to them. This gives an indication of what colors the animal perceives and which ones it is most sensitive to. 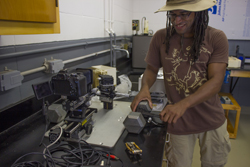 By studying this unique eye, Marisano hopes to learn more about strepsipteran behavior. What is this insect getting out of its eye? What kind of light does it respond most powerfully to? What role does the eye play in finding a female? These are all questions Marisano hopes to answer in his research.

Great perseverance, Marisano! We look forward to seeing what your research turns up.