Some shark species utilize an umbilical cord, much like mammals, to nourish developing embryos and provide them with oxygen during gestation. However, the vast majority of elasmobranchs (sharks, skates, and rays) lack an umbilical connection between the mother and developing embryos. So how do these species supply their embryos with oxygen without an umbilical connection? Dr. Taketeru Tomita and Dr. Chip Cotton recently submitted a new manuscript for publication that investigates how embryos of these "aplacental" live-bearing sharks obtain oxygen while in the uterus. Their investigation was two-fold. First, they determined that the site of oxygen uptake for developing embryos changes from outside the body through external gill filaments to inside the body through the standard gill filaments. Second, they determined that the method of oxygen uptake changes from passive diffusion during early stages of gestation to active ventilation, i.e. opening and closing the mouth to pump water over the gills.

It is widely believed that sharks evolved from egg-laying (oviparous) species to live-bearing (viviparous). This view is supported by the findings of Dr. Tomita and Dr. Cotton, with similar trends in embryonic development observed between viviparous and oviparous species. Using the deep-water dogfishes as a study subject, they proposed a new model for how live-bearing shark embryos obtain oxygen while they are gestating in the uterus. 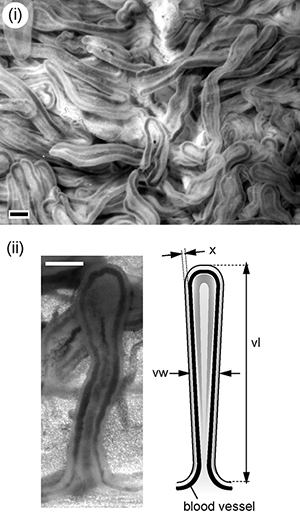 During the very early stages of gestation, the embryo is small enough that oxygen diffuses directly into the body. As the embryo grows, it develops external gill filaments that extend out of the gills and into the surrounding uterine fluid. Oxygen can diffuse directly into these filaments where the blood then picks it up and transports it to the rest of the body. At some point, this method of oxygen uptake cannot keep up with the demand of the growing embryo, so it develops jaw muscles and begins to actively pump water through the mouth (buccal pumping – see video), which sends oxygen into the internal gill filaments (these are the “normal” gills that adults have). Once the embryos have developed this capacity for oxygen uptake, it no longer needs the external gill filaments, so they are resorbed.

It has been assumed that embryos of aplacental species rely on the uterus to supply oxygen to developing embryos. Oxygen transport structures (villi) have been identified in the lining of the dogfish uterus, but according to Dr. Tomita and Dr. Cotton’s measurements and calculations, during the final stages of gestation, the dogfish uterus cannot sustain the oxygen demand of the growing embryos. They hypothesize that at this stage, the pregnant female must periodically evacuate uterine fluid and refill it with seawater (uterine flushing) as a means of replenishing oxygen inside the uterus for the developing embryos to respire.

Going forward, Dr. Tomita and Dr. Cotton hope to continue investigating embryonic development in dogfishes, using captive specimens so they can potentially observe the phenomenon of uterine flushing directly. To date, very few anecdotal accounts of uterine flushing exist for any fish species and the process has been captured on video only once in wobbegongs, a species more closely related to nurse sharks and whale sharks, yet very distantly related to the dogfishes.