We are very excited to welcome Dr. Taketeru Tomita, who joins us as a postdoctoral researcher from the Japan Society for the Promotion of Science. Dr. Jose Castro (NOAA) is acting as Taketeru’s postdoctoral advisor during his two year stay, but the bulk of his research will be performed at FSUCML under the direction of Dr. Dean Grubbs and Dr. Chip Cotton. 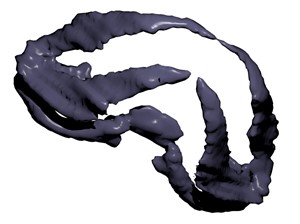 Dr. Tomita earned his PhD from the University of Tokyo, where he studied functional morphology of elasmobranchs (sharks, skates and rays), particularly related to the development and function of respiratory structures in elasmobranch embryos. In collaboration with the Okinawa Churaumi Aquarium, he examined embryonic development of the mouth and gill structures for the manta ray (Manta alfredi) and cloudy catshark (Scyliorhinus torazame). He determined that early stage embryos (0-4 months) extract oxygen passively (via diffusion) by using external gill filaments. Once the embryo is more developed (4-8 months), these gill filaments disappear (it is still unknown exactly what happens to these filaments) and the embryo begins to respire by actively pumping water in through its mouth and out through its gills. The manta ray eventually loses the ability to actively pump water over the gills in this fashion, thus adults of this species are obligate ram-ventilators, meaning that they must continue swimming in order to respire. 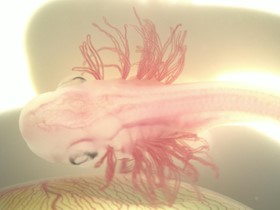 Dr. Tomita also plans to collaborate with Drs. Grubbs and Cotton on a couple of new projects during his time here at the FSUCML. The first of these will explore the function and evolution of shark claspers. Unlike most bony fishes, shark reproduction requires copulation (internal fertilization). The male inserts its clasper into the body of the female in order to inject sperm. However, for many species, the detailed clasper structure and mechanism of insemination is still largely unknown. Dr. Tomita plans to clarify this through anatomical and biomechanical studies. In another project he will track the embryonic development in gill structure (as described previously) and uterine villi (structures used by pregnant sharks to facilitate embryonic respiration). As gestation progresses and embryos grow in size, the respiratory demand will increase, which should in turn be reflected in the size, shape and density of the uterine villi. These investigations into the reproduction and embryonic development for a variety of species can shed light on the evolutionary origins of different modes of reproduction in elasmobranchs. 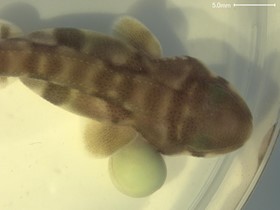 Dr. Tomita grew up in Yokohama, Japan. In his spare time, he enjoys pastel drawing. His favorite subject to draw is scenery.

We are thrilled to have Dr. Tomita with us, and look forward to learning more about his research findings!