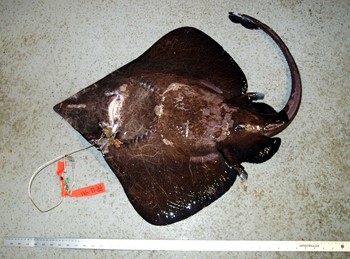 Dr. Dean Grubbs, Dr. Chip Cotton, and crew recently returned from a 10-day Deep-C fish ecology cruise in the Gulf of Mexico, where they caught their third specimen (since 2012) of a skate believed to be a new species. Multiple taxonomic experts have examined this skate (or pictures of it) and determined that it is likely new to science! If this is confirmed, the team will write a description of the new species and give it a Latin name. Alternatively the skate might simply be a species that was not previously known to inhabit the Gulf of Mexico. With nearly 300 described skate species globally, this will require some time to rule out that possibility. 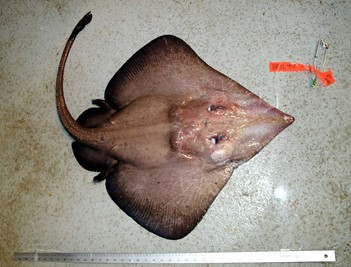 They did not stop there. Drs. Grubbs and Cotton and their crew also caught two sixgill sharks at deeper depths than they have ever caught them before (one caught at 1,100 meters (3,600 feet), and the other caught at 1,300 meters (4,300 feet) deep). They attached an archival satellite tag to one of the sharks (approximately 15.5 feet long). This tag will record depth, temperature, and light levels for 3 months and then will pop off of the shark and transmit data to a satellite that will forward the data along to Dr. Grubbs and Dr. Cotton. Although the crew has tagged several other sixgills in the Gulf of Mexico, they are particularly interested in the movement patterns of this shark because it was caught much deeper than the others they have previously tagged. 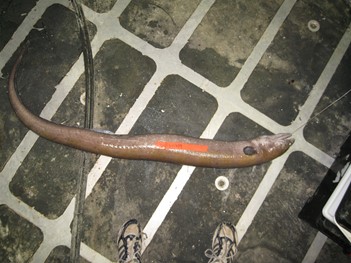 Participants on the cruise included the two ship’s captains, Robby Shakespeare and Bobby Francis, and seven science crew on each “leg” of the trip (before and after their port call in Panama City). The science crew was led by Drs. Grubbs and Cotton, and included seven students from Florida State University (Jo Imhoff and Bianca Prohaska), University of North Florida (Arianne Leary, John Whalen, and Hannah Hart), and University of West Florida (Beverly McAcy and Mariah Pfleger). These students were there to collect samples for their respective projects and to generally assist with the work on the cruise. 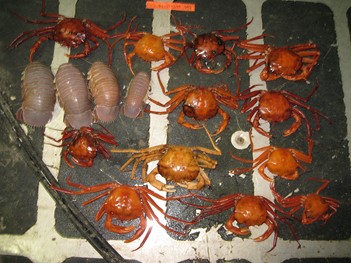 During the cruise, the team fished 38 “stations”, which is a demersal (bottom) longline with two fish traps attached. The depths for these stations ranged from 173 to 1860 meters (560-6100 feet) deep. The overall catch from these stations yielded a total of 343 fishes from 35 different species: 15 species of elasmobranchs (sharks, skates), 17 species of bony fishes, and 3 species of hagfish. They also caught 181 invertebrate specimens from 8 different species, mostly deep-sea isopods and various species of crabs and shrimp. Approximately 3000 samples were collected for studies of oil and mercury contamination, life histories (age, growth, reproduction), phylogenetics (relationships among groups of organisms) taxonomy (classifications), diet, and food webs. Most of these samples support several ongoing graduate student research projects.

Stay tuned to find out whether their “new” skate is indeed a new species and we will report more about that DEEP sixgill shark after the tag pops off in three months!