In a new study by Drs. Chip Cotton and Dean Grubbs, the reproductive biology of two deep-water shark species, the Gulper Shark (Centrophorus granulosus) and the Great Lanternshark (Etmopterus princeps) has been characterized for the first time. Very little is known about the biology of these species, yet the Gulper Shark, which lives in 450-1100m water, is targeted for its liver oil in several countries and the Great Lanternshark, which lives in 450-4500m water, is a common bycatch in some deep-sea fisheries. Understanding the reproductive biology of these sharks can aid regulators in implementing sustainable harvest levels by ensuring that adequate numbers of females are given a chance to reproduce before harvesting.

Drs. Cotton and Grubbs determined several reproductive parameters for both of these species: embryonic sex ratio, fecundity (number of offspring), size at sexual maturity, and the relationship of reproductive output (fecundity and embryo size) to maternal body size. Both species exhibited approximately a 1:1 sex ratio, which is important when constructing population models for management. 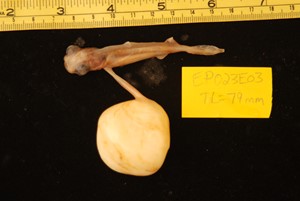 Both of these species lack any defined mating “season”. Because these species live in deep waters, the environment is relatively stable, with limited light, lower temperature, and relatively lower food availability. Therefore, they can reproduce any time of year, rather than waiting for a specific season. The Great Lanternshark reproduces consecutively (with a resting period between pupping and fertilization to start her next pregnancy) and produces approximately 11 embryos per litter. However, the Gulper Shark has a concurrent ovarian cycle (i.e., no resting period between birth and fertilization) and produces approximately 5 embryos per litter. Why does the Gulper Shark take no rest between pregnancies? While she is gestating, she begins forming the next clutch of eggs in her ovaries. Given that Gulper Shark eggs are enormous in size compared with other fishes (~ 100 cm diameter), a great deal of energy is required to simultaneously gestate one batch of embryos while developing the next batch of eggs to be subsequently ovulated. 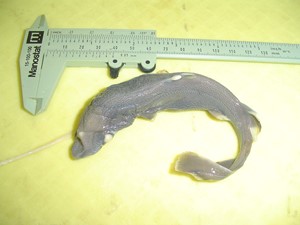 In addition to documenting the reproductive parameters, Drs. Cotton and Grubbs also examined embryonic development in these two species, with a specific goal to determine whether the pregnant female supplements embryonic yolk with additional nourishment during pregnancy. The results for the Gulper Shark were somewhat inconclusive. However, the Great Lanternshark does in fact appear to nourish embryos to supplement their yolk during pregnancy (matrotrophy). This information reveals the relative energetic costs of gestation, as a component of the overall reproductive effort, for these two species. Additionally, documenting the degree of maternal nutritional supplementation for a variety of species can shed light on evolutionary trends in reproductive biology. It is generally assumed that ancestral sharks were egg-layers and various forms of live-bearing evolved from these, including various forms of matrotrophy. By comparing the degrees of matrotrophy observed among older lineages of sharks with those of more recently evolved species, such studies may either support or challenge the notion that egg-laying was the ancestral form of reproduction among sharks and their relatives.