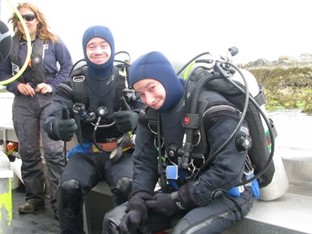 When most people around here think of scientific diving, they think of the warm, clear waters of the Gulf of Mexico. In May, for instance, one would expect to dive in a bathing suit or shorty wetsuit in 78-80°F (25-27°C) gulf waters. This is not the case for FSU science divers Dr. Don Levitan (Chair, FSU Department of Biological Science), Kevin Olsen (graduate student), and Keeha Levitan (technician). They travelled thousands of miles with their drysuits, thermal gloves, and neoprene hoods to conduct research in the waters along the wave-swept shores on the west coast of Vancouver Island, British Columbia, where water temperatures range from 45-52°F (7-11°C) -- an underwater world very different from the balmy one found in the northeastern gulf. 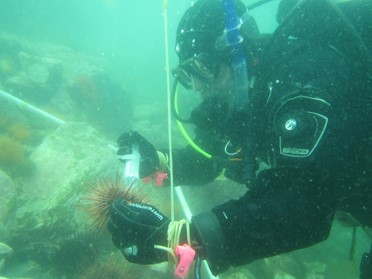 Each spring since 1989, Dr. Levitan and his students have studied the fertilization ecology and evolution of sperm and egg traits in sea urchins in British Columbia Canada on dive sites composed of rocky substrate filled with a mix of kelp and large invertebrates such as sea urchins, sea stars, anemones, sea cucumbers and cup corals. Their primary focus is the red sea urchin, Strongylocentotus franciscanus, which reaches nearly 20 cm in diameter and can release millions of eggs and billions of sperm into the water for external fertilization. The vast number of gametes produced by these individuals makes it possible to do field experiments in which eggs and sperm released during spawning into the ocean can be captured to estimate fertilization and reproductive success. 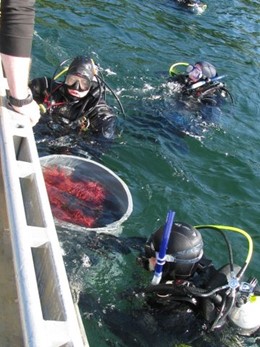 On their recent expedition to chilly Canadian waters, Dr. Levitan and his crew examined how released sea urchin sperm combine, to determine whether individual eggs can “choose” sperm from different males. They first induced male sea urchins to spawn within 1 m2 quadrats at various densities and then collected tiny water samples (including sperm) using syringes that already containing unfertilized sea urchin eggs. For each trial, they measured current flow, mapped male positions within quadrats, and collected tissue samples from all adults for genetic analysis. Back in the lab, the dive team, together with Ellen Kosman (Ph. D. student) and Jeremy and Chelsie Levitan, cultured fertilized eggs for three days before fixing the larvae for paternity analysis.

Although they have not yet analyzed this year’s samples, results from previous years suggest that the potential for eggs to choose among sperm from different males depends on the degree of water turbulence and the distance between competing males. The implication of this work is that adult behavior and population density can play a large role in the evolutionary dynamics of gamete evolution.