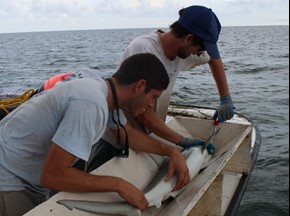 Since 2008, and beginning in earnest in 2009, the Florida State University Coastal & Marine Laboratory (FSUCML) has been conducting a coastal shark survey to monitor relative abundance and distribution of sharks in the Big Bend and St. George Sound regions. The work is part of the Gulf of Mexico States Shark Pupping and Nursery Area (GulfSPAN) survey, a larger eastern Gulf coast-wide survey operated and coordinated by the National Oceanic and Atmospheric Administration’s National Marine Fisheries Service (NOAA NMFS) Southeast Fisheries Science Center in Panama City, which includes three other collaborating research institutions in addition to the FSUCML. The FSUCML survey is operated by graduate student Cheston Peterson and his advisor, Dr. Dean Grubbs (FSUCML faculty). The survey, which primarily runs from April to October and includes additional sampling from November to March, is designed to identify important nursery ground areas for juvenile sharks and essential fish habitat, or EFH - a catch-all term for habitats critical for growth and reproduction of fishery species at any life stage, as defined by the 1976 Magnuson-Stevens Fishery Conservation and Management Act.

Cheston and a team of FSUCML graduate students and volunteers use longline fishing and shark nets to survey shark populations at 2 fixed stations off the FSUCML every month and at least 40 stations in the Florida Big Bend, covering seagrass habitats from St. Marks to the Anclote Keys, every summer (June and July). While the fixed stations allow the team to track relative abundance of sharks and other fishes through time, the annual Big Bend stations are spatially balanced to determine as much where sharks aren’t as where they are. The FSUCML’s involvement is crucial to the larger GulfSPAN survey because it bridges the survey’s gap from east of Apalachicola Bay to Crystal River, Florida.

Dr. Grubbs brought Cheston on to the project in 2011 after his first semester as a Master’s student because his thesis was focused on samples and data collected during the survey. In addition to his research, Cheston now manages their tagging data and writes the FSUCML portion of NOAA’s yearly report. 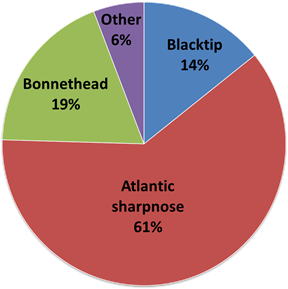 Now that the FSUCML survey has collected over 5 years of data, the findings can be incorporated into stock assessments of small coastal sharks such as bonnethead, Atlantic sharpnose, and smoothhound sharks; and large coastal sharks such as blacktip sharks. Stock assessments play a key role in fisheries conservation because they provide managers with information necessary to make sound decisions in maintaining sustainable populations. “In many ways, that is what it’s all about. Collecting data that will actually be incorporated into management,” says Cheston, who is also just happy he gets to “go play with sharks” as part of his job. 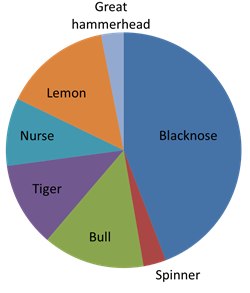 The survey also gives many students the opportunity to gain valuable field experience. Volunteers on the FSUCML GulfSPAN survey include undergraduate students from FSU and other universities all over the world, as well as exceptional high school students looking to begin field work experience. Many volunteers go on to attend graduate school and others pursue state level management jobs. One undergraduate student volunteer from the University of Wisconsin, Melissa Hruby, said this about her experience with GulfSPAN, “This gave me a chance to work with these beautiful and admirable [sharks] up close and to view them in a light that many people don’t get the chance to.”

Right now, the FSUCML GulfSPAN survey is the only group that has data on these species at shallow depths in the Big Bend region. They are also some of the only researchers that regularly catch young-of-the-year blacknose sharks (Carcharhinus acronotus). Young-of-the-year sharks can be determined by the conspicuous umbilical scar, which signals that they were born within the past year. 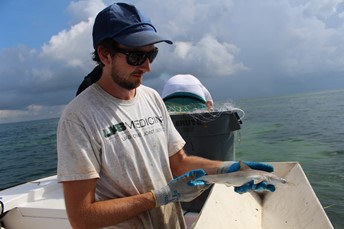 This is very important for determining and protecting nursery habitats for this species and allowed the FSUCML team to collect tissue samples for a population genetics analysis of blacknose sharks, a collaborative study headed by Dr. David Portnoy at Texas A&M University. Surveys such as GulfSPAN provide excellent platforms for collaboration among institutions, as they generate data over large geographic areas and offer many opportunities for sample collection.

Cheston and Dr. Grubbs hope to continue this survey for as long as possible in order to obtain long-term data. Cheston is now a Ph.D. student, but he continues to work diligently on the survey. The survey is a collaborative effort, and Cheston’s labmates and volunteers play a huge role in the field work each month. “I really couldn’t do it without them…,”says Cheston, “… and I think we’re all glad to know we’ll be out of the office and in the field for at least one day each month.”