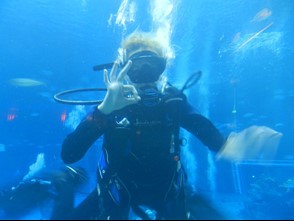 Morgan Hawkins is a student at Whitney High School in Rocklin, CA. While visiting the FSUCML, she helped Dr. Heidi Geisz run a workshop exploring the organisms living at the edge of the sea and helped Dr. Sandra Brooke retrieve coral from samples collected during a deep-sea research cruise. Morgan plans to earn a marine biology degree when she finishes high school. She is passionate about photographing marine species, and expects to use her talents to help people understand human impacts on marine life and habitats.

Leonardo Feitosa, a student at the Universidade Federal Do Maranhão in Maranhão, Brazil, interned in the Grubbs laboratory for the summer, assisting with the Big Bend shark survey and analyzing sawfish research data. Leonardo is working on his senior thesis in which he is examining shark species being sold in Maranhão fish markets. Learn more about Leonardo's research on the FSUCML website. 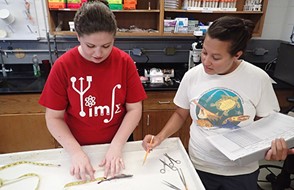 Hannah Klein, an FSU student pursuing a double major in biological science and physics, worked this summer and fall on an honor’s thesis with Johanna Imhoff, a Ph.D. student in Dr. Dean Grubbs’s Laboratory, collecting, organizing, and analyzing tissue samples from deepsea sharks for mercury content. After earning her undergraduate degree, Hannah plans to go to graduate school to get her doctorate in ocean engineering, specifically on the use of unmanned water systems.

Brian Moe, who recently completed his M. Sc. degree at Nova Southeastern University, joined Dr. Chip Cotton’s Laboratory this summer as a technician before becoming a Ph. D. student at FSU in the Department of Biological Science this fall. He has been processing samples from the deep sea to investigate age and growth in several species of deep-water sharks. He also participated in the July Deep-C cruise. Learn more about Brian's doctoral research. 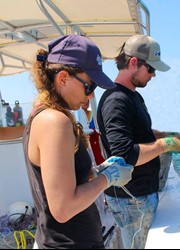 Sam Bedgood (incoming senior at FSU), Kylie Wilson (incoming senior at FSU), and Samantha Skrob (incoming sophomore at FSU), and Christian Gredzens, a graduate student of Dr. Marianna Fuentes in the FSU Department of Earth Ocean and Atmospheric Sciences, were all volunteers on the GulfSPAN shark survey. The FSUCML survey, which is part of a larger Gulf coast wide survey operated and coordinated by the National Oceanic and Atmospheric Administration’s National Marine Fisheries Service (NOAA NMFS) Southeast Fisheries Science Center in Panama City, is run by graduate student Cheston Peterson and his advisor, Dr. Dean Grubbs. The goal of the FSUCML shark survey is to monitor abundance and distribution of sharks in the Big Bend region. Learn more about the GulfSPAN survey. Cheston is also examining community composition along environmental gradients and food-web dynamics of coastal seagrass habitats.

Marisano James is a PhD candidate at the University of California, Davis studying Strepsiptera, tiny internal parasites that use other insects such as wasps and planthoppers as hosts. Marisano is returned to the FSUCML in summer 2015 with the hope of photographing the elusive Strepsiptera in flight. Learn more about his research.

Devin Resko, a master’s student at the University of Guam (UOG), received an award from the UOG Sea Grant Program to support his research on sharks and their movements in Guam's near shore waters. His research will focus on the type of habitat and movement patterns of local coastal shark populations in Guam. He used part of his funding to visit the FSUCML to learn methods for capturing and tagging sharks. He was another one of the many volunteers for the GulfSPAN shark survey.

Deanna Beatty, graduate student at Georgia Tech and repeat FSUCML visitor, is testing for differences in the microbial community between two species of marsh plants (Spartina alterniflora and Spartina patens) as well as within a species among genotypes (Spartina alterniflora). Studies on the microbiome in other species, including vertebrates and invertebrates, indicate that the microbial community can play a critical role in the function and health of their hosts. Deanna is curious if microbes could be playing a similar role in marsh ecosystems, affecting plant health and productivity. Understanding the role of microbes on Spartina health will be important for this ecosystem engineer that protects coastlines and provides habitat for many other species. The FSUCML has facilitated her work, which is currently underway in the greenhouse.

Dr. Paul Harnik from Franklin and Marshall College, and his students sampled offshore FSUCML to collect seafloor sediments aboard the R/V Apalachee. This was part of an ongoing study focused on the evolution of the life history strategies in marine mollusks. View photos from their trip.

Dr. Tom Manning, Valdosta State University, and his students, Sydney Plummer and Tess Baker, visited the FSUCML several times throughout the summer to work on an oyster aquaculture project. They are testing how wild oyster growth varies between plain concrete and modified concrete specially made with added nutrients. During their preliminary analysis, the modified concrete blocks supported a larger colony of oyster growth than the plain concrete.

Dr. Shala Hankison, associate professor of zoology at Ohio Wesleyan University, and her team visited the FSUCML in continuation of previous visits to collect sailfin mollies (Poecilia latipinna). She is working on understanding how specific male mating behaviors (such as courtship rate) influence paternity in multiple paternity broods.

Tallahassee Museum Summer Program took a field trip to the FSUCML where the 2nd-4th grade campers enjoyed a discussion about local coastal specimens with Dr. Heidi Geisz, a marsh walk, and examining specimens in the lab.

Levy County GEAR UP Program (Gaining Early Awareness and Readiness for Undergraduate Programs) spent a day at the FSUCML in July, where they learned about deep sea species, trawled in the seagrass beds to learn more about local specimens, and examined specimens under the microscopes. View the full photo album.

Camp STEMTastic, organized through Thomas University in Thomasville, Georgia for 7th grade students, spent two great days in July at the FSUCML. One of the activities they were able to enjoy was a beach walk on which they explored the many creatures living at the edge of the sea. View the full photo album. 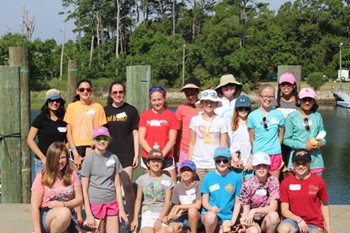 20 middle school girls from Leon and Gadsden counties had the opportunity to work side-by-side with scientists for the day at the FSUCML for Girls Exploring the Marvels of Marine Science (GEMS) Day. The event, presented by the Center for Ocean-Atmospheric Prediction Studies (COAPS), gave the girls a chance to interact with other female scientists, including Dr. Felicia Coleman and Dr. Sandra Brooke (FSUCML), as well as participate in analyzing scientific data and collection sampling.

The University of Georgia and Ohio Northern University brought students from marine biology courses to the FSUCML for hands on field experience. During their time here last summer, they examined local flora and fauna and learned about the vital ecosystems near the lab. 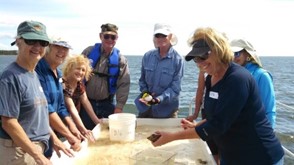 The Sea Around You class from the FSU Osher Lifelong Learning Institute (OLLI) visited FSUCML on October 3rd, a very busy day because of the Whatever Floats Your Boat Regatta. They enjoyed a boat expedition of their own and also had a chance to watch the regatta in action.

The North Florida Chapter of the Fulbright Association visited the FSUCML to introduce visiting international students from Florida State University and University of Florida to Florida’s natural surroundings in the Gulf and abundant sea life.

International Fellows, Mr. Chai Ming Lau, Program Manager, Reef Check Malaysia, and Mr. Imam Fitrianto, Planner, Ministry of Marine Affairs and Fisheries, Indonesia, accompanied by Tony Murray (City of Tallahassee’s Environmental Policy and Energy Resources Department) visited FSUCML. The City of Tallahassee is hosting the Fellows as a part of the Professional Fellows Exchange Program, which is part of a partnership between the International City/County Management Association and the U.S Department of State. The group enjoyed a tour of the lab, and chatted with FSUCML faculty Dr. Sandra Brooke, Dr. Chip Cotton, and Dr. Dean Grubbs to get input on best practices for combining science and management. 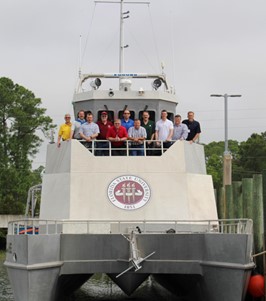 FSU hosted the Siemens Higher Education Building Technology Council meetings and participants toured the FSUCML as a highlight of FSU activities. The Council, which includes representatives from Penn State University, Michigan State University, University of Florida, and other universities from around the country, and Siemens staff received an overview of FSUCML research, including the technology involved, and then toured the lab and RV Apalachee. View pictures from their trip