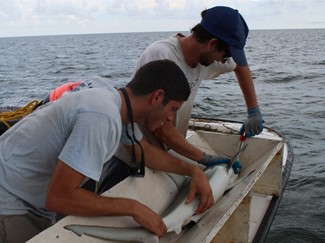 This past spring, Ph.D. candidate Cheston Peterson and Dr. Dean Grubbs published two papers in the journal Environmental Biology of Fishes* (one with former student Alejandra Mickle) describing the community structure and trophic ecology of sharks and bony fishes along the Florida Big Bend coast.  This body of work covered a 300-km stretch of the Big Bend, home to one of the world’s largest continuous seagrass beds, extending from the St. Marks River to Anclote Key just north of Clearwater, FL. Peterson and Grubbs conducted fishery-independent longline and gillnet surveys to document the elasmobranch (shark and ray) and teleost (ray-finned fishes) assemblages throughout the region during the summer from 2009 to 2012, using stable isotope analysis - a nonlethal technique used to study  food webs - to describe the trophic structure of those communities.

During these surveys, they found at least 13 species of elasmobranch and 56 species of larger teleost inhabiting the area.   Of these 69-plus species, only five dominate:  three species of sharks -- two carcharhinids (Atlantic sharpnose sharks, Rhizoprionodon terraenovae, and blacktip sharks, Carcharhinus limbatus) and one sphyrnid (bonnethead sharks, Sphyrna tiburo)-- and two species of ariid catfishes (hardhead catfish, Ariopsis felis, and gafftopsail catfish, Bagre marinus).

Stable isotope analysis revealed that this diverse community appeared to be supported by a range of primary producers, including seagrasses, algae, and phytoplankton, with considerable dietary overlap among species. Top predators in the Big Bend included large sharks, such as the great hammerhead (Sphyrna mokarran) and bull sharks (Carcharhinus leucas). Several bony fish species (such as gafftopsail catfish, bluefish [Pomatomus saltatrix], and Spanish mackerel [Scomberomorus maculatus]) appeared to occupy similar mid-level trophic positions as the other species of shark. Tiger sharks (Galeocerdo cuvier), while abundant in the Big Bend and in many ways a top-predator, were found to occupy mid-level trophic positions according to the isotope analyses due to their wide dietary breadth and consumption of primary consumers such as green sea turtles (Chelonia mydas). .

Peterson, the lead author on both papers states, “These manuscripts represent the bulk of my

Master’s thesis and I’m very glad they’ve both been published. This body of work is the most comprehensive assessment of the large fish communities in the seagrass habitats of the Big Bend, and the only documented standardized survey of coastal sharks in this region where water depths don’t generally exceed 6 or 7 meters [approx. 20-23 feet]. Using a combination of fishing gears, with a range of hook and mesh sizes, along with stable isotope analyses, provided a nice picture of the ecology of the fishes in the Big Bend seagrass habitat. We believe assemblages of fishes are driven by regional variation in river influence and freshwater inputs, as we saw patterns of community structure along gradients of salinity and water clarity - in addition to depth. We found similar patterns in the results of the stable isotope analyses, as our southern-most region was fairly distinct and has the least river influence relative to the rest of the system.”

The surveys, which have continued since 2012 and are now in their twelfth year, are led by Peterson through the Grubbs lab as part of the NOAA Gulf of Mexico States Shark Pupping and Nursery Area project (GULFSPAN). The intent of GULFSPAN is to describe essential fish habitat for juvenile coastal sharks. The annual surveys are complemented by monthly surveys conducted at two seagrass stations off the FSUCML. Peterson and Grubbs originally sampled these two sites annually from April through October.  For the past seven years, however, they expanded to year-round monthly sampling. Peterson is analyzing the first 10 years of both the annual and monthly surveys as a chapter of his dissertation.  We look forward to seeing the results of this work in the near future!