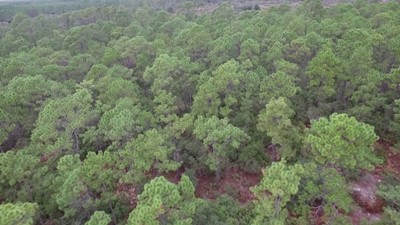 Longleaf Pine (Pinus palustris) forests, considered biodiversity hot spots, once dominated the coastal plain in the southeastern United States. However, due to past exploitation of the forests’ resources, just three percent of its pre-settlement range remains. Today, Longleaf pine restoration has become a priority in many areas. These forests have proven to be quite resistant and adaptable to climate change conditions and are home to many animals that depend on longleaf habitat and are in need of varying degrees of protection. These include the Gopher Tortoise (Gopherus polyphemus), listed as threatened, Eastern Indigo Snake (Drymarchon couperi), listed as threatened, and Red-Cockaded Woodpecker (Leuconotopicus borealis), listed as endangered.

We have begun a restoration project of our own at the Florida State University Coastal and Marine Laboratory (FSUCML). We are working on returning fire to a longleaf pine forest on the lab property north of Highway 98 (known as the North 70 tract). This is an exciting restoration project, but it also comes with a unique set of challenges. 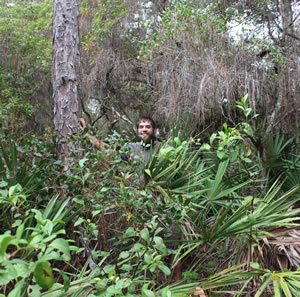 Perhaps John McGuire of the longleaf alliance described it most appropriately when he wrote,

“In the unbroken, primal landscape… fires once frequently moved through these longleaf pine woods like a gentle swell on the ocean’s surface.” These fires encourage the growth of forbs, grasses, and sedges by burning the mid-story, or layer of vegetation that consists of trees whose height is between the heights of the smallest and tallest trees, and groundcover plants. This opens up room for new recruits and exposes sandy, mineral soils.

Unfortunately, except for a small portion of the tract exposed to a wildfire, the majority of the longleaf stand on the FSUCML North 70 tract has not been burned for so long that no one is certain when the last fire occurred.

Without frequent fires in the North 70, shrubs and hardwood trees have grown into a dense mid-story with a thick layer of organic matter (or “duff”) accumulated on the ground. Re-introducing fire to this landscape characterized by an excess amount of fuels could cause a very hot burn, with devastating results. Indeed, if fire was haphazardly re-introduced, it could lead to fires jumping from the mid-story into the longleaf pine canopy, resulting in high tree mortality. 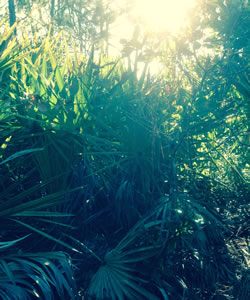 Ensuring the safest prescribed burn possible requires considerable planning and preparation. We started in 2016 by clearing the mid-story and groundcover vegetation with a large mulching machine called a gyrotrak that chopped most of the hardwood trees and overgrown shrubs into mulch. We then brought in an army of wonderful volunteers who joined in to clear shrubs away from the trunks of the longleaf pines where the gyrotrack could not be used. These volunteers, together with FSUCML staff, raked duff away from individual trees to reduce the amount of potential fuel in place so that when we do introduce fire, there is a lower possibility of persistent smoldering fires around each tree. It exposes the tree roots which, if burned, places the longleaf pines at risk. Therefore, it is necessary to give the pines a growing season or two to recover from the initial clearing before safely introducing fire to the tract. It may be years before it is ready to burn, depending on the moisture index and amount of rain in the area. 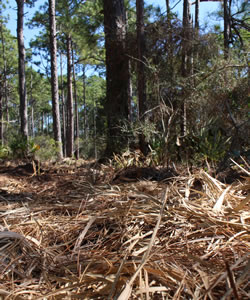 The longleaf restoration project is on the FSUCML blog!

NOTE - We partnered with WeatherSTEM to create a lesson on Fire Weather, which features this project. Check it out here.