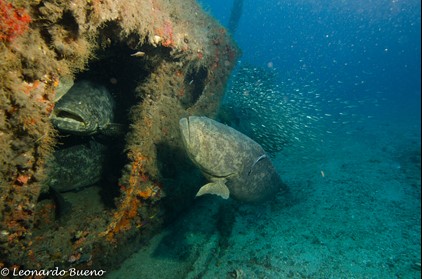 As the Florida Fish and Wildlife Conservation Commission debates reopening the Goliath Grouper fishery in Florida state waters, stakeholders and policymakers turned to FSU researchers for their expertise on the matter. Former Marine Lab Director Dr. Felicia Coleman, former faculty member Dr. Chris Koenig, and former PhD student Dr. Chris Malinowski were recently interviewed by National Geographic about the ongoing debate. Coleman, Koenig, and Malinowski began their research on Goliath Grouper (Epinephelus itajara) ecology at the FSUCML and since leaving the lab, have continued their research by focusing on the high levels of mercury contamination in these fish and its effects on their health throughout the coastal waters of Florida. They have also focused their efforts on policy-related issues. Until 2018, Goliath Grouper were classified by IUCN, the global authority on the status of species, as Critically Endangered largely due to habitat loss and overfishing. With recent regional recovery in Florida waters, they are now labeled as a Vulnerable species, but this reclassification does not mean they are out of the woods as many factors continue to contribute to their high risk of extinction in the wild. Coleman, Koenig, and Malinowski continue to advocate for the protection and conservation of these mammoth fish, using their work as evidence that while the species is indeed recovering, their survival is still at risk.

In the National Geographic article, Coleman and Malinowski state goliath grouper recovery has faced setbacks in recent years and that at present the data do not support opening even a limited fishery. Coleman has also argued that keeping the fishery closed will continue to help boost Goliath Grouper ecotourism within the state, noting, “The economic value to the state of Florida of an ecotourism diving industry focused on viewing Goliath Grouper far outweighs the value of a limited fishery.”

FWC is in the process of moving forward with creating a detailed plan for further consideration to lift the ban on fishing that has been in place since 1990. In response, Coleman, Koenig, and Malinowski penned an open letter signed by more than 100 prominent marine scientists and conservationists. To learn more and read the letter, click here.