We are celebrating Women’s History Month by highlighting six trailblazing female scientists from all over the world! Read on to learn about each woman’s contributions to modern marine science. 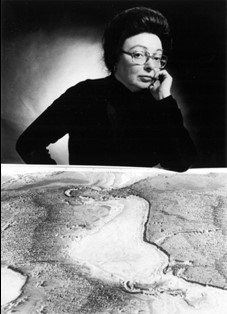 Marie Tharp broke barriers for women in the 1950s when she became an oceanographic cartographer after landing her first research assistantship at the Lamont Geological Laboratory in Columbia University. During this time, the push for ocean floor exploration began to increase as SONAR technology developed.  There was widespread belief that the ocean floor was a flat expanse of mud, so Tharp and her longtime research partner, Bruce Heezen, joined a project to map the topography, or layout, of the seafloor. Unfortunately, at this time, women were not allowed to join boating expeditions. Instead, Heezen ventured out to sea and sent Tharp initial measurements collected through SONAR data. She then plotted these data points' latitude and longitude using only a pen and ruler. This plotting turned into the first North Atlantic ocean map published in 1957, and the first full world’s ocean map in 1977.  Ultimately, Tharp helped disprove the theory that the ocean floor was flat, as her maps revealed 40,000 miles of an underwater ocean ridge. 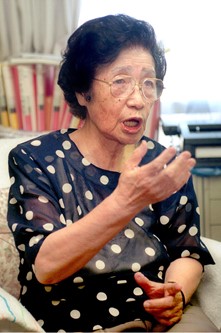 Japanese geochemist Katsuko Saruhashi had an enormous impact on marine science as she developed the first method and tools for measuring carbon dioxide in seawater, later becoming known as ‘Saruhashi’s Table’. One of her most notable discoveries revealed that the Pacific Ocean releases twice as much carbon dioxide as it absorbs. Prompted by her childhood fascination of the rain and her parents’ encouragement, she received a degree from the Imperial Women’s College of Science, now named Toho University.  She became the first women to obtain a Ph.D. in Chemistry from the University of Tokyo and the first woman elected to the Science Council of Japan.  She devoted much of her life to advocating for equal opportunities for women in science. She established the Society of Japanese Women Scientists, and founded the Saruhashi Prize, an annual award given to a female scientist who serves as a role model to younger women scientists. 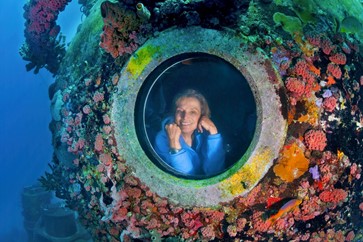 Sylvia Earle is an alumna of Florida State University, where she first learned how to dive with SCUBA gear. Graduating with a degree in botany, Earle completed her thesis work on algae in the Gulf of Mexico. After holding positions at numerous prestigious institutions, including Harvard University, the Radcliffe Institute, and Cape Haze Marine Laboratories, in 1970 Earle led the first all-female team of marine aquanauts as part of the Tektite II experiment.  This experiment was created to explore the marine realm and test the viability of deep water habitats and the health effects of prolonged living in underwater structures.  After leading several expeditions around the globe, in 1979 Earle made history again by setting the world untethered dive record. Wearing a JIM diving suit, she descended 1,250 feet in the Pacific Ocean. Earle also became the first female scientist to hold the position of Chief Scientist from 1990-92 at the National Oceanic and Atmospheric Administration, and later, National Geographic Society’s first female explorer in residence. 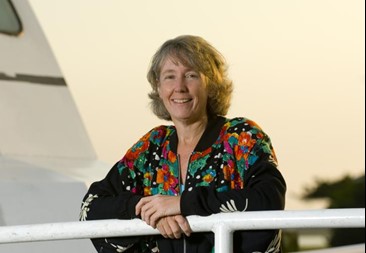 Cindy Lee Van Dover is a deep-sea biologist who was a part of the first expedition in 1982 to hydrothermal vents on the East Pacific Rise. Upon graduation with her Masters in Ecology from UCLA in 1985, she took part in numerous expeditions and published on a variety of topics, including the description of a novel photoreceptor in a vent invertebrate. This prompt led to the discovery and characterization of a geothermal source of light at vents, pushing scientists to further investigate its biological significance.  After receiving her Ph.D. in 1989, Van Dover then became the first female pilot of the deep-diving submersible, ALVIN. She was pilot-in-command of 48 dives.  Van Dover also published the first textbook on hydrothermal vents, The Ecology of Deep-Sea Hydrothermal Vents, and has been awarded a number of prestigious honors including Virginia Outstanding Scientist in 2006. She was also the Director of Duke University Marine Laboratory in Beaufort, NC between 2006 - 2016. 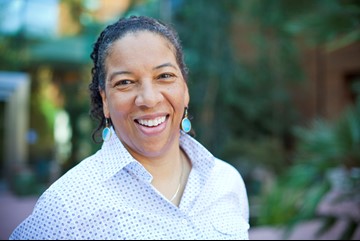 Dawn Wright has transformed the fields of marine geology and geography through her pioneering efforts to use Geographical Information Sciences (GIS) to map the seafloor and ocean. She has over 20 years of deep-sea expeditions under her belt, coining her the nickname "DeepSea Dawn" within the Oceanography community. She co-authored one of the first books on marine GIS, Marine and Coastal Geographical Information Systems, and to date, has been published in more than 150 articles and 10 books. She received her Master’s in Oceanography from Texas A&M and her Ph.D. in Physical Geography and Marine Geology from UC Santa Barbara. Wright has continued to shatter glass ceilings and is the current and first female Chief Science Officer of Environmental System Research Institute (ESRI). She is helping ESRI, the world’s largest GIS company, towards their goal of mapping the entire ocean floor by 2030. 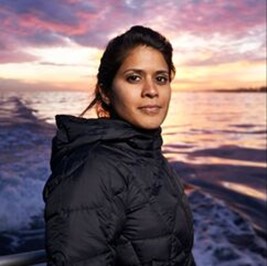 Asha de Vos is most widely known for her ground-breaking work in blue whale research, but she is also an ocean educator and TED Senior Fellow. Originally from Sri Lanka, de Vos holds degrees from the University of St. Andrews, University of Oxford, and University of Western Australia. She is the first and only Sri Lankan to hold a Ph.D. in Marine Mammal Research.  Additionally, De Vos is the first Pew Fellow in Marine Conservation from Sri Lanka and also the first National Geographic Emerging Explore from a small island nation. In collaboration with her blue whale research, de Vos founded Oceanswell, Sri Lanka’s first marine conservation research and education nonprofit.