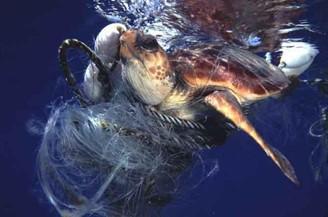 Think about all the plastics that you come across in your day to day life. Some of the things you may think about off the top of your head are grocery bags, water bottles, straws, and rings that hold sodas together. Did you know that most littered plastic waste worldwide ultimately ends up in our waterways? Whether it travels through streams, drainage systems, or rivers, these plastics, large and small, end up polluting our waterways, in lakes and rivers and in the sea.

In the ocean, there are places where currents converge and in which plastic debris accumulates. One such area is commonly referred to as the “Pacific Garbage Patch.” This patch is bounded by the North Pacific Subtropical Gyre. An ocean gyre is a large system of ocean currents formed by global wind patterns and forces created by Earth’s rotation. The area in the center of a gyre tends to be very calm and stable, and thus is capable of retaining large quantities of plastic debris for extended periods of time. 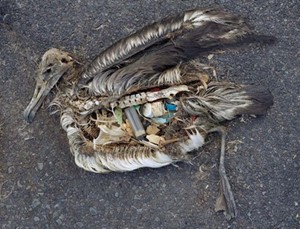 There are even tiny bits of plastic, or microbeads, in many of our household products such as face washes and toothpastes. Because they are so small and buoyant, they often escape capture by water treatment plants, which are not equipped to filter out particles of such small size. The microbeads become part of the aquatic food chain, often floating near the surface and looking like a food source to many fish and to birds. Scientists are still determining how this affects the humans who consume organisms that have ingested microbeads. In December of 2015, President Obama signed a bill that prohibits selling and distributing products containing microbeads. This bill goes into effect July 2017. This is a huge step in the efforts to protect our waterways, but there is still much more work to be done. 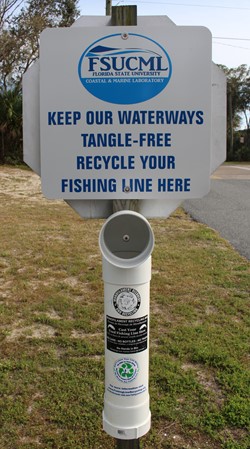 So what can you do to help? Conservation starts at home and every effort helps. You can take part in Beach Cleanups near you, do your part to pick up litter, recycle, and even reconsider the products you use that contain plastics in them. So many plastics are recyclable, including monofilament fishing line and nets. Yes, even your used fishing line can be recycled. Here at the FSU Coastal and Marine Laboratory (FSUCML), we have a monofilament recycling unit located at the entrance to the lab. Bring your used fishing line you’re ready to get rid of and we will recycle it for you. It’s as easy and that!

Have questions on what you can and cannot recycle? Find out here.