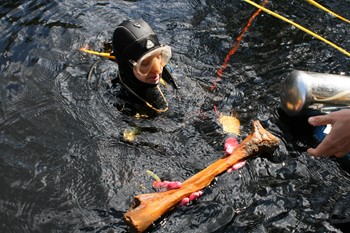 Diving in the murky waters of the Aucilla River in the Big Bend region of Florida may not seem like the most obvious choice of locations to find clues about early American civilizations, but according to Dr. Jessi Halligan’s research, this is exactly the place to go. Dr. Halligan, who began as an Assistant Professor in the FSU Department of Anthropology in January, and her colleagues Michael Waters from Texas A&M University and Daniel Fisher from University of Michigan, spent several years working in the Aucilla River at the Page-Ladson site. This site is a 30ft deep sink hole in the bed of the Aucilla that was discovered by a former U.S. Navy Seal named Buddy Page, who would SCUBA dive in the river to relax, and the Ladson family who owns the property. 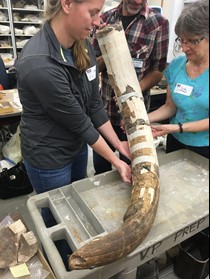 Inside the Page-Ladson site, the team discovered artifacts such as a stone knife and mastodon bones with butcher marks on them. These deposits were found in soil along the edge of the sink hole. Soils only form when they are exposed, so these artifacts could not have washed into the sink hole from a different site or location. Because the artifacts were submerged in underwater soil, the organics in them were well preserved for radiocarbon dating, and archaeologists were able to date them back to more than 14,500 years, proving that humans settled the southeastern United States as much as 1500 years earlier than was previously believed.

This is a major discovery not only because this is significantly earlier than previous studies suggested, but also because these people had to have come to America via a different route than was previously accepted. It was believed that the early Americans arrived by traveling across the Bering Land Bridge from Siberia and spread from Alaska through a corridor that had melted in the ice sheets covering Canada, and throughout the United States. However, the earliest this corridor had melted enough to support life was about 14000 years ago.

Now, Dr. Halligan says this opens up even more questions that she hopes to answer. How has climate and environment change affected the cultures that lived in these areas? What was their lifestyle? How was the landscape formed and how was it impacted after human inhabitants? She even hopes to expand her research area, exploring areas of Apalachee Bay, near the FSUCML. The possibilities are endless!

Diving serves as an invaluable tool to many scientists conducting interdisciplinary research. It gives researchers contact with areas that the average person does not have easy access to, opening up a whole new world of discoveries. If you are interested in learning more about the Academic Diving Program at the FSUCML, click here.